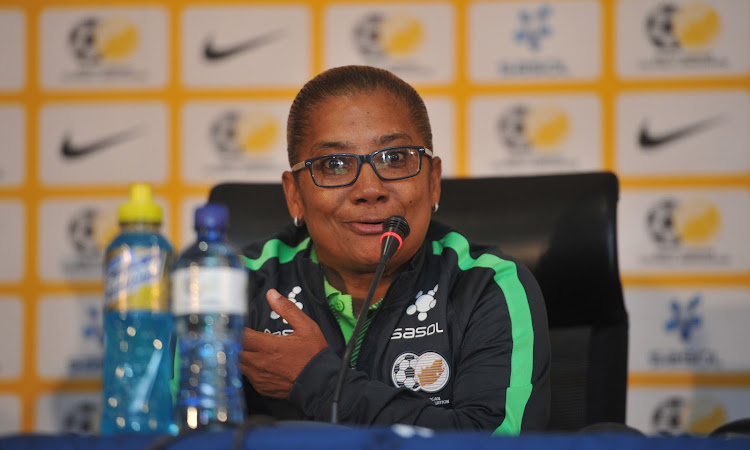 Desiree Ellis smiles during a press conference to announce her as the new full time head coach at SAFA House on 22 February 2018.
Image: Sydney Mahlangu/BackpagePix

Coach Desiree Ellis says the hunger and desire shown by the Banyana Banyana players to claim a hat-trick of Cosafa Women’s Championship trophies bodes well for the future as she looks ahead to the start of the 2020 Olympic Games qualifiers against Botswana later this month.

South Africa defeated Zambia 1-0 in Sunday’s final to clinch the regional trophy‚ a feat achieved without their overseas-based players and having blooded a number of new individuals in senior international football.

"It is a fantastic achievement by the whole group‚ it was a lot of hard work put in‚ especially after the World Cup and being inactive for a month‚” Ellis says.

"It was a well-deserved victory and there was some hard graft out there‚ but the players showed how badly they wanted it.

"When we needed to grind we could grind and once again we were defensively solid. In the midfield we took control of matches. There were a lot of good moments.”

Banyana had an impressive 11 different goal-scorers at the tournament‚ and Ellis says that ability to spread the load among the players and not rely on a few individuals is key going forward.

"Players are maturing and realising that opportunities are there to take‚" she says.

"It was great that we also had different goal-scorers‚ so we don't rely on just one person.”

But she admits more work has to be done in the opposition box and it is not a problem she can solve alone.

"The biggest thing we have to work on is putting the ball in the back of the net‚" she says.

"It doesn't start with the national team‚ it starts back at their clubs where they are.

"We have a week to prepare for games‚ you do two or three sessions on finishing but that is not enough‚ it is an effort by coaches throughout the country."

The Cosafa Women’s Championship has been vital for Ellis in building her squad over recent years and she points back to a extraordinary semi-final against Zambia in 2017 as the moment that set her side onto an eventual World Cup appearance.

Banyana trailed 3-0 with 13 minutes to go‚ but roared back to draw 3-3 and then win the tie on penalties‚ before beating Zimbabwe in the final.

"If you go back and remember 2017 we were 3-0 down and I think that was the big turning point for this group of players. After that‚ everything they touched turned to gold and it didn't matter who we brought in. These players also rose to the occasion this year.”