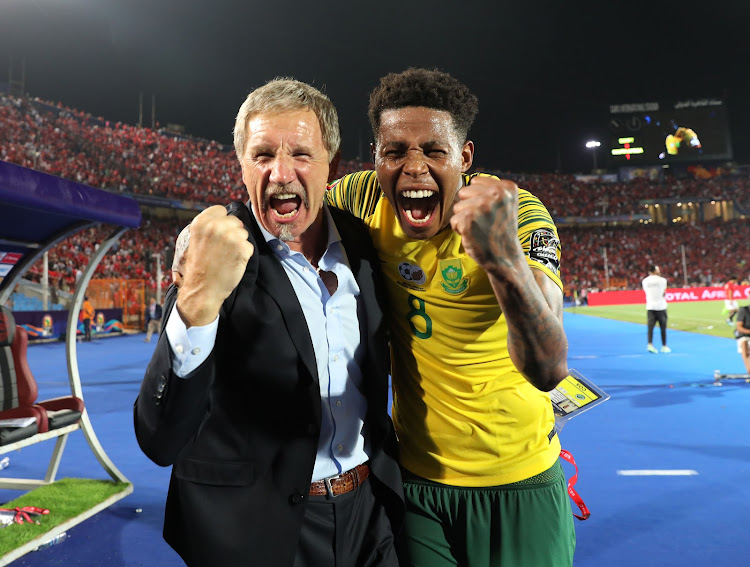 Media reports have linked Baxter to the job at the club now simply officially called FCSB‚ though he would be forgiven for being wary of taking it.

Becali‚ a former shepherd who made a fortune in real estate after the fall of communism in the country‚ is known for unashamedly interfering in team selections.

Baxter‚ who left South Africa on Wednesday‚ was asked about the link to FCSB on email.

“Nothing I’m rushing into but Stueua is a massive club so you don’t dismiss it‚” was his one-line response.

Steaua Bucharest's owner Gigi Becali (R) sprays champagne on his players at the end of the football match.Becali is notorious for being impatient with coaches.
Image: AFP PHOTO / ALEXANDRU HOJDA / MEDIAFAX FOTO

Before his departure on Wednesday night for his family home in Sweden‚ Baxter had also told TimesLIVE he would not necessarily rush into any jobs.

“I’m going back to Sweden first‚ and then I’ve got some meetings‚ and then we’ll see if I dive straight back into the saddle or take it until Christmas maybe‚” he said.

Reports on various South African and Romanian websites have been that FCSB are interested in hiring Baxter‚ who resigned as Bafana coach early this month having steered the national tam to the quarterfinals of the 2019 Africa Cup of Nations in July.

Baxter is sure to be wary of taking another job for an erratic club owner.

Leaving Kaizer Chiefs in 2015 after winning two league and cup doubles in three years he joined Genclerbirligi in Turkey.