Milutin Sredojevic , coach of Orlando Pirates during the Absa Premiership 2018/19 match between Orlando Pirates and Mamelodi Sundowns at the Orlando Stadium, Soweto on the 01 April 2019.
Image: ©Muzi Ntombela/BackpagePix

More accurately‚ Mosimane said he will miss how Sredojevic made Pirates Sundowns’ greatest rivals of the past two seasons‚ and pushed Downs’ coach competitively.

Pirates finished runners-up to Sundowns in the past two Absa Premiership seasons.

Sredojevic resigned in a bombshell announcement made by Pirates late on Friday night. He has been strongly linked to Egyptian giants Zamalek.

Rulani Mokwena - Mosimane’s former Sundowns assistant-coach‚ who was Sredojevic’s assistant at Pirates - started as Bucs’ caretaker-coach with a 1-0 MTN8 quarterfinal loss against Highlands Park on Saturday night‚ having had less than a day in the job.

“I must tell you I was very sad. Because ‘Micho’ [Sredojevic] is a personal friend of mine‚” Mosimane said. 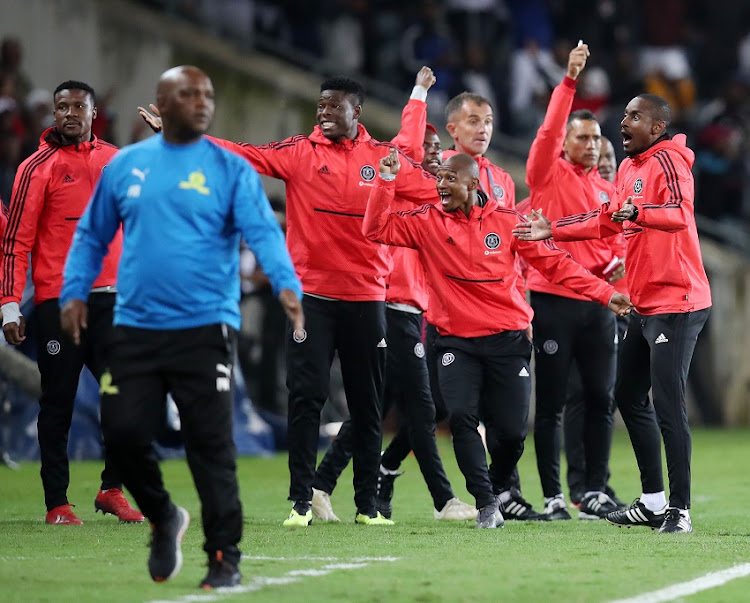 “Micho gave me Denis Onyango. I know Micho for many years‚ from when he was still at Saint-George [in Ethiopia].

“He invited me over to a Cecafa tournament to see players‚ and he highlighted Denis and other guys when I was still at SuperSport United. That ’s how far back we go.

“And I sent him a text‚ and he hasn’t replied yet‚ that I’m saddened by him leaving. Because we had a very good‚ friendly competition.

“We never had a go at each other. It was professional. And he’s a professional guy‚ a humble guy.

“I even texted Rulani as well – I wished him luck‚ and that he has been looking for that [a head coaching role]‚ and he got the opportunity to do it.

“He must just fly. I told you guys when he was still next to me that I think Rulani is going to be better than me.

“But you know how football is. You still have to travel the road. And Rulani must never worry about the loss (1-0 quarterfinal home defeat to Highland Park) because it’s part of football.

“But Micho provided very good competition. I just feel now‚ like ... you know when you had somebody who kept you on your toes‚ and you fight with him all the time.

“And it’s like‚ ‘Ooh‚ what happened to the fight?’ You know what I’m trying to say. This guy’s been pushing me for the last two years.

Sundowns meet Cape Town City next in a league match at Lucas Moripe on Tuesday night.