Zamalek have officially confirmed the appointment of former Orlando Pirates coach Micho Sredojevic‚ who says his appointment is a “dream come true”.

Sredojevic sensationally resigned from Pirates on Friday‚ 24 hours before their MTN8 quarterfinal defeat to Highlands Park‚ citing personal reasons and telling reporters he was heading to Serbia to be with his sick mother.

Instead he flew to Cairo to put pen-to-paper on a one-year deal with Zamalek‚ who had been chasing his signature for some weeks.

Sredojevic has often spoken of his affection for Pirates and his respect for chairman Irvin Khoza‚ so this latest stunt‚ which came amid newspaper allegations of a case of sexual harassment having been opened against him‚ will leave a bitter taste in the mouth.

“I have been coaching in Africa for 19 years.

"I have worked in seven countries and visited 50 out of 54 African countries‚ but today I can say that my dream has come true after taking charge of Zamalek‚” Micho was quoted by KingFut.com.

“We have a fantastic squad. The best Tunisian players‚ the best three Moroccan players‚ in addition to the Egyptian ones. The club has all the success factors.

“Zamalek is a special club that you fall in love with as soon as you enter it. I want to work hard in order to achieve the fans’ goals.”

Sredojevic dumped Pirates on Friday after a meeting with Khoza‚ and continued to deny a link with Zamalek‚ even as he sat in transit in Istanbul after leaving Johannesburg.

He even denied a comment from Zamalek president Mortada Mansour that he would be the club’s next coach‚ calling it “total nonsense”. 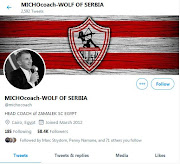 Image: TWITTER/Micho Sredojevic Former Orlando Pirates coach Micho Sredojevic dumped Pirates on Friday after a meeting with Khoza‚ and continued to deny a link with Zamalek‚ even as he sat in transit in Istanbul after leaving Johannesburg.

“I am travelling to see my mother who is sick in Serbia. And we shall see what will come after that. [Whether] I will come back to Africa. But if he [Mansour] really wants me he needs to fork out millions‚” Sredojevic told TimesLIVE.

“The moment [after] Pirates announced I have resigned [I travelled]. I am now in Istanbul flying to my country.

"That is total nonsense about the other guy [Mansour]. How is it mathematically possible to do the things in that way?

“He has been begging me to come to his team and whatever. Maybe I will even go. But the point is I have not signed anything‚ I have not agreed anything.”

While technically he had not signed a contract yet‚ it was seemingly his intention to do so.