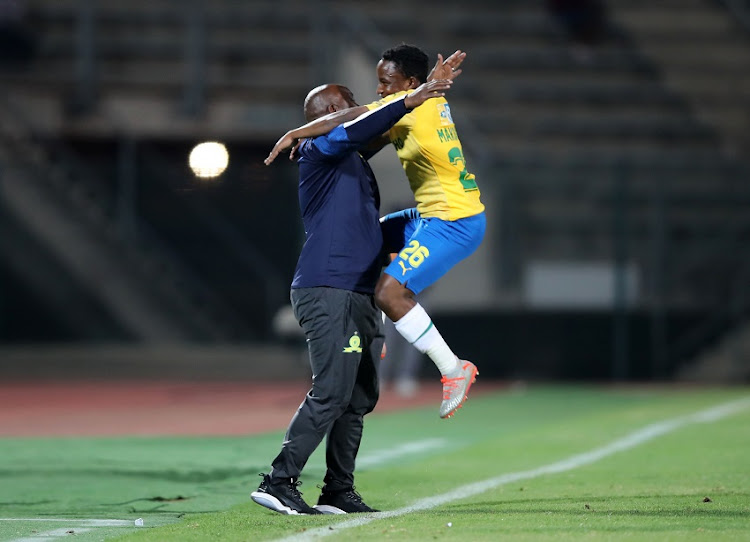 Keletso Makgalwa reminds Pitso Mosimane of a young Percy Tau‚ Mamelodi Sundowns’ coach said after the rising star winger came off the bench and played a key role changing the game in the Brazilians’ 3-1 MTN8 quarterfinal victory against Bloemfontein Celtic on Saturday night.

Mosimane said he knew the introduction of a less experienced player in Makgalwa at Lucas Moripe Stadium would raise eyebrows with his team 1-0 down from Ndumiso Mabena’s 57th-minute free-kick.

The coach said he made his decision to throw in the 22-year-old based on him having had a good preseason.

Lively little runner Makgalwa rewarded the coach earning the 74th-minute equalising penalty that was slotted by Themba Zwane‚ and‚ after Mosa Lebusa headed Downs ahead in the 78th‚ added an 89th-minute third.

“Ja unbelievable hey. He remind me of Percy when he was coming up‚ and we gave him a chance and he took the opportunity‚” Mosimane said after the game.

“And it’s good. Last week I saw the boy‚ the right-back [Gregory Damons] who had been playing in the MDC [reserve league]‚ get man-of-the-match. This week it’s our MDC boy who came up.

“I was a little bit disappointed when [Maritzburg United coach] Eric Tinkler returned him‚ and felt that he was not the right player [on loan‚ where Makgalwa played last season‚ but not retained].

“If you remember the match where we played against Maritzburg‚ where as a winger he gave Ricardo Nascimento such problems.

“I was just surprised. But these things do happen. I said‚ ‘I need to keep him’. He had a brilliant preseason.

“And these things come up when you don’t have your normal players. We had nine players not available in the preseason – the six who were in the Africa Cup of Nations and Emiliano Tade‚ Gaston Sirino and Mauricio Affonso injured.

"And we pushed Lebo [Maboe] to the wing.

“So (on Saturday) we can look brilliant‚ especially with the subs – I brought them right. But it’s lessons learnt from last week [where Chippa United fought back late to 1-1] of doing it right.”

Sundowns meet Cape Town City next in a league match at Lucas Moripe on Tuesday night.