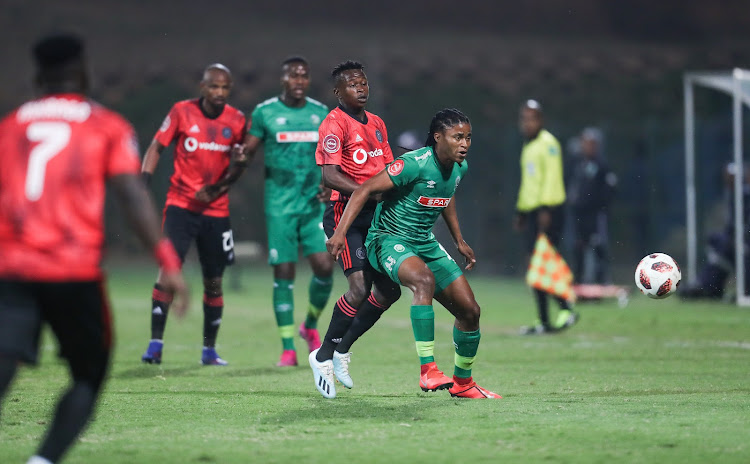 Orlando Pirates were pretty, snappy and entertaining in the first half, but increasingly on the back foot in the second in their 0-0 Absa Premiership draw against AmaZulu at King Zwelithini Stadium in Umlazi on Tuesday night.

AmaZulu coach Cavin Johnson had goalkeeper Siyabonga Mbatha pull up injured in the warm-up, meaning a debut in the sticks for 23-year-old Neil Boshoff.

Bucs, for a team reeling from the loss only on Friday of head coach Milutin Sredojevic, were more-than decent at the start, but increasingly faded.

Of course it was. Mokwena – arguably SA’s most exciting young coach in the school of theory, and now getting his first chance to test himself in the college of hard knocks – had less than a day, and apparently not one training session, to work with his squad.

On Tuesday night, with just another single day’s training on Monday, the strides made already under the ambitious young coach seemed actually fairly impressive.

Pirates would be structure-orientated first under Sredojevic, but still play some expansive football within that.

Bucs under Mokwena appear striving for something more fluid and attack-orientated first, though retaining the structure.

The caretaker-coach had a provocative XI out, starting from a backline that had the skill of Asavela Mbekile, Innocent Maela (in the middle next to Happy Jele) and Paseka Mako to call on, behind a midfield pairing of Fortune Makaringe and Xola Mlambo.

A frontline of Siphesihle Ndlovu, Vincent Pule, Thembinkosi Lorch and Gabadinho Mhango promised the smell of napalm on a KwaZulu-Natal evening.

The crispness of some of Pirates’ passing in the opening half was at times a marvel to behold, inasmuch as their finishing lacked the same level of execution.

Dissecting AmaZulu like a brain surgeon, early on Pule won the ball off Jabulani Ncubeni at the right touchline and fed Lorch through to square for Mhango, who hit over.

Usuthu were far from bad. The impressive midfielder Siyethemba Sithebe effortlessly connected a drive from a standing position that sailed onto beaten Wayne Sandilands’s crossbar.

Pule chipped to Ndlovu on the left, who crossed back in. Pule had run in, and deflected a header onto the right upright. Lorch struck a drive hard at Boshoff.

Pule again played a form of one-two early in the second half, feeding overlapping Mbekile on the right, who swerved a low ball back into the forward, who struck over.

But, if Mokwena is on a steep learning curve thrown it at the deep end of this long PSL season, Bucs’ drifting focus in their application in the second half seemed to reflect that.

AmaZulu stepped up the half-chances, such as when sturdy Kiwi central midfielder Andre de Jongh teed up Sibusiso Mabilisia for a drive over the bar. De Jongh’s strike near the end forced an athletic stop from Sandilands.