No goals at Athlone as newcomers Stellenbosch hold Maritzburg 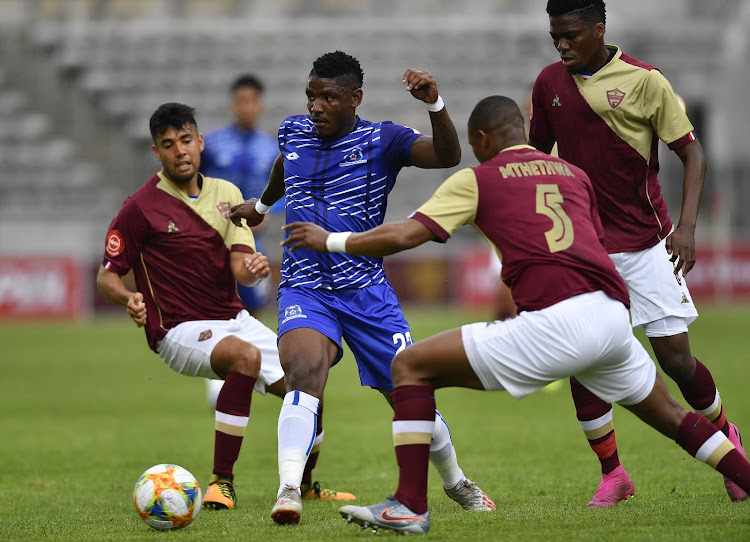 Premiership newcomers Stellenbosch FC and Maritzburg United played to a goalless draw at the Athlone Stadium on Sunday afternoon‚ providing evidence that the two sides have a lot of work to do‚ especially in front of goal.

The two sides have now played three matches without a win and Stellenbosch are yet to score.

It was game in which both goalkeepers were outstanding but not many of the other protagonists.

Maritzburg United goalkeeper Richard Ofori was the central figure in a tepid first half‚ characterised by far too much possession turnover and poor decision-making.

It did not help that a light drizzle and cold wind made play tougher.

Ofori made a superb save‚ tipping the ball over his own crossbar to deny Stellenbosch skipper Jarrod Moroole in the 18th minute.

Marc van Heerden’s freekick had struck Moroole‚ who did not know much about it‚ on the thigh and the ball looped dangerously towards goal before Ofori swatted it away.

Stellenbosch’s other first half opportunity came from a 38th minute corner where Sandile Mthethwa headed firmly towards goal and Ofori scrambled to make a one-handed stop.

Maritzburg took 50 minutes before they had a real opportunity with Daylan Claasen coming in late with snap shot that rebounded back off the upright.

Soon after Claasen looked to be bundled over but no penalty was given‚ with the loose ball falling for Kutumela who missed with a poor effort.

But just before the hour mark‚ Kutumela was through after a slip-pass by Mohau Mokate but Stellenbosch’s new Dutch goalkeeper Boy de Jong made an outstanding stop.

A curling corner with two minutes to go saw Rushine de Reuck power a header towards goal but it hit De Jong on the forehead‚ and although the home keeper knew nothing about it‚ it was another fantastic save.

For the most part‚ however‚ it was a match with lots of efforts but without much skill and easily forgettable.

For most parts of the first half, Mamelodi Sundowns picked apart this modest Otoho d’Oyo side from Congo Brazzaville with precision and ruthlessness ...
Sport
2 years ago