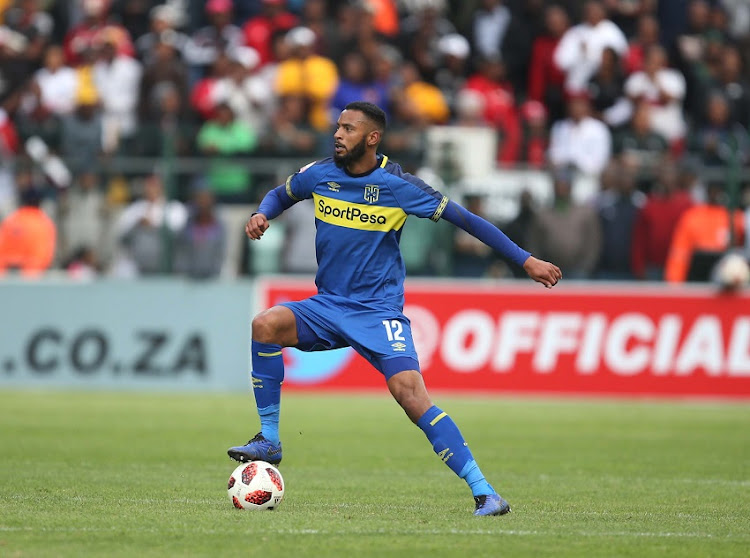 Taariq Fielies during the Absa Premiership 2018/19 game between Cape Town City and Orlando Pirates at Athlone Stadium in Cape Town on 4 May 2019.
Image: © Bertram Malgas/BackpagePix

Cape Town City’s defensive hardman Taariq Fielies is making a much faster than expected recovery from stomach surgery and went back to training at the weekend‚ returning months ahead of his doctor's expectations.

The 27-year-old went under the knife at the end of last season and shocked all at the club with his rapid return to action as he had been expected to be sidelined until next year.

Fielies was born with intestine twists that had never bothered him before but they suddenly produced abdominal pain last season.

It will come as a relief to coach Benni McCarthy who has been bemoaning a lack of a central defender and was angry with his chairman John Comitis for not signing Robyn Johannes back from Bidvest Wits to plug the holes at the back.

Fielies’ quicker than expected return‚ plus bitterness over Johannes departure from City two season ago‚ meant that Comitis refused to budge.

Johannes‚ whose contract at Bidvest Wits was cancelled‚ is moving instead to Stellenbosch FC while Fielies is now in contention to make the squad when City take on SuperSport United away from home on Saturday night.

City have been using Edmilson in the centre of defence‚ alongside Keanu Cupido‚ but the Mozambican international prefers to play on the left and was only filling in as an emergency measure.

Abubakar Mobara has also had one game as centre-back but City prefer him as a holding midfielder.

City’s other centre-back‚ Ivorian Kouassi Kouadjia‚ is still recovering from the massive knee injury he suffered in last season’s MTN8 final where he ruptured ligaments and tore the meniscus.

He is still a month away from returning.