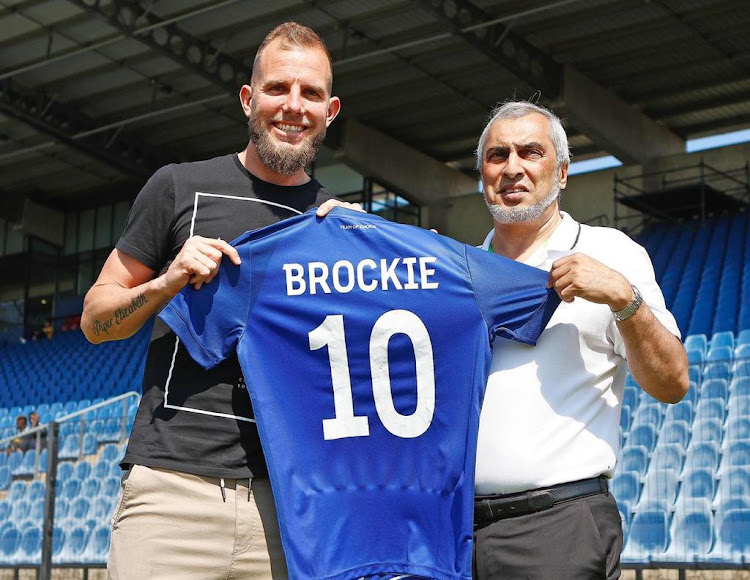 Jeremy Brockie is on loan at Martizburg United from Mamelodi Sundowns until the end of the season.
Image: TWITTER/Maritzburg United

Jeremy Brockie will not be able to play on Saturday for new club Maritzburg United against parent club Mamelodi Sundowns in terms of the loan agreement between the two clubs.

The management of both clubs did not reply to TimesLIVE's queries about his availability‚ seemingly worried about the possible publicity fallout‚ but coach Eric Tinkler has confirmed that Brockie cannot be picked as specified in the deal between the two clubs.

“It’s not ideal but that is what was in the agreement‚” said the coach on Tuesday as he prepared for Saturday’s trip to Atterdigeville.

It means there is no chance of a dream start against his old club for the former New Zealand international‚ looking to get his career back on track after a frustrating year on the sidelines at Sundowns.

Maritzburg‚ who are still looking for their first victory of the season‚ will only be able to use him for the first time when they host Chippa United on Friday‚ September 27.

They have games against Baroka FC‚ Cape Town City and Orlando Pirates after that.

Brockie‚ who turns 32 next month‚ is itching to get back to action and Maritzburg played several friendly matches over the last weeks to try and improve his match fitness.

Sundowns’ decision to prohibit Brockie from playing against them reverses a trend of recent years when the club allowed loanees to feature against them – contrary to the accepted norm worldwide.

It was five years ago this month that Sundowns’ owner Patrice Motsepe bucked the trend when he unilaterally declared that any Sundowns player on loan at another Premier Soccer League (PSL) outfit could play against the Brazilians.

It came as a knee-jerk reaction to criticism of Sundowns’ expansive buying policy and accusations they were trying to purchase all the top talent to prevent them from playing against them.

Coach Pitso Mosimane has always been irritated watching his own players line up against Sundowns but had to step into line when Motsepe caved under the fierce criticism.

We are off to the Lucas Moripe Stadium to face @Masandawana.
Supporters busses leave this Saturday morning.

Sometimes it has come back to hurt Sundowns‚ like in April 2015‚ when Musa Nyatama was the star performer and author of a one goal as Bloemfontein Celtic effectively ended the Brazilian's hopes of retaining their league title with a shock 5-0 win at the Lucas Moripe Stadium.

A few weeks later‚ another Sundowns loanee‚ Mogakolodi Ngele‚ slammed home an equaliser for Platinum Stars in a league match against the Brazilians‚ putting their hope of clinching a Caf Champions League place in jeopardy.

In the end‚ Sundowns did finish runners-up to Kaizer Chiefs.