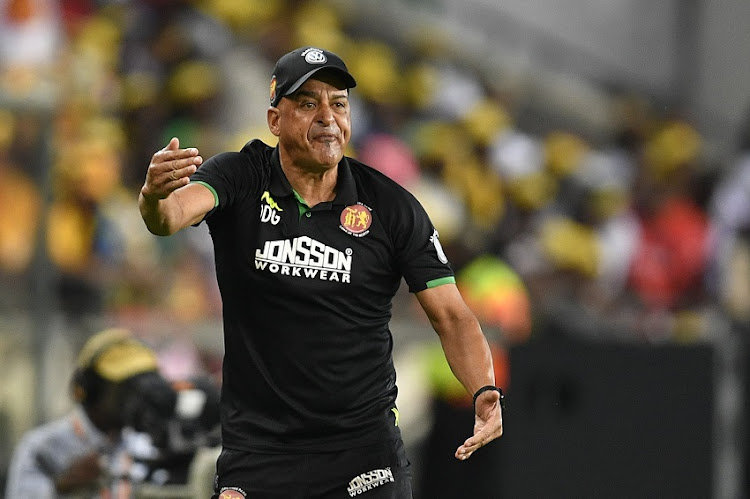 Highlands Park coach Owen da Gama has encouraged his charges to put losing the MTN8 trophy to SuperSport United beyond them as he looks to ensure that they don’t lose momentum in their league campaign.

The Lions of the North suffered a 1-0 loss to SuperSport in the top eight final on Saturday and Da Gama immediately told the media that he wants his team to remain focussed on doing well in the league.

“The journey continues for us‚” Da Gama said after his team’s defeat in their maiden final.

“It’s a learning curve for us. Great experience and we’ll get there one day.

“I think they were not too bad. I remember a season with Silver Stars when we got to the Coca-Cola final.

“We lost 2-0 to [Kaizer] Chiefs but that made us a better team. We kept on growing.

“We’ve got a lot of young boys in the team and it’s just a growth period. It’s part of the journey for us to get the team where we believe we can get it.”

On making sure Park keep their heads up after Saturday’s loss‚ Da Gama said his technical staff will sit down and talk to the players to get their minds and energies refocused on the rest of the season ahead.

“I think we’ve got to pick ourselves up‚” said Da Gama‚ who has been in three cup finals as a head coach‚ winning one Telkom Knockout with Silver Stars in 2006.

“We’ll have a bit of introspection and see where we made mistakes‚ where we can improve and just try to be a better team.

“We mustn’t take this as the end of the world. This is the start of the journey for us as far as we’re concerned.

“We’ve just had a great start [this season] and we just have to continue. We still believe that getting the team right is not a destination‚ it’s a journey – and it’s a process.

“This is just one of those speed bumps‚ those hiccups that you get. For us we’ve learned how to lose in the final.”

Da Gama said losing in the final will strengthen his team mentally and a lot of his young players will grow.

“We now know what it is to lose in the final‚ so we just got to grow from that.

“But I always come back to my players and I say I’m such a positive human being that I always believe that you don’t lose. You learn and I think we’ve learnt a lot.

“We’ll take a positive out of this‚ we’ll grow and we’ve tasted it. There are many teams that have been in many years in the PSL that have not tasted what we’ve tasted in such a short period.

“So‚ all credit must go to the players. They’ve done fantastically well and we’ll keep on learning.

“For us‚ it’s a learning curve‚ we’ll just keep on learning.”