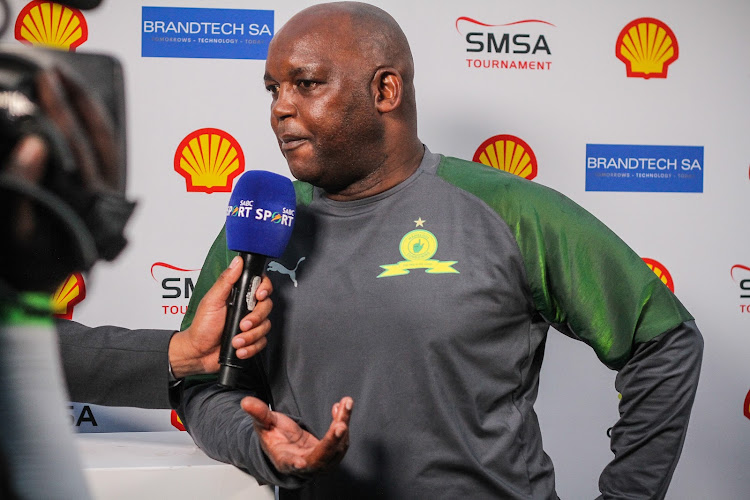 Pitso Mosimane believes his two new No 9s – Tokelo Rantie and Mauricio Affonso – can give Mamelodi Sundowns a sharp end once they both are brought back to fitness.

Sundowns’ coach admitted he had thrown Rantie in at the deep end as a starter in Saturday’s 4-2 Shell Helix Ultra Cup friendly defeat against Kaizer Chiefs at FNB Stadium‚ but said he had needed to give the physical‚ pacey former Bafana Bafana striker game time.

Rantie (29) signed at Downs in September following a lengthy trial after playing just six league games at Genclerbirligi in Turkey in 2017-18‚ and none at Cape Town City in 2018-19 before being released with the club citing personal and fitness issues.

“It’s good to give everybody a chance to play‚ to see where they are. We wanted to see where Tokelo is‚” Mosimane said.

“And we know he has not been training. That’s why I said to you [the media] we must give him a break. The guy hasn’t played football for almost two years‚ and then we give him this big game here.

“I think that we threw him in the deep end too early. But I have to.

“He has done a very good preseason‚ he has done very well. I have to give him a chance to play.”

Affonso‚ the 1‚92m‚ 27-year-old Uruguayan former Penarol centre-forward signed in July‚ has been prevented from making his Premier Soccer League debut by a knee injury.

Mosimane‚ though‚ had said he was pleased to have two players who‚ once they are fit‚ can fill the ‘9’‚ advanced striking role again at Downs in Rantie and Affonso‚ having fielded mostly ‘false No 9s’ for the past few seasons.

“They have experience‚ those 9s. One [Rantie] has played in the English Premier League‚ the other [Affonso] in the Copa Libertadores‚” Downs’ coach said.

“That’s why we have played everybody there – because we don’t have a 9. The 9s have been away or injured.

“Of these two 9s one was not fit‚ he’s getting there. Affonso is also getting fitter‚ slowly. He can’t play 90 minutes. I don’t think he can play 45. But he will get his 30 minutes.”

Jeremy Brockie was signed to play the centre-forward role but inexplicably could not score at Sundowns and has been loaned to Maritzburg United.

Bafana Bafana gave new coach Molefi Ntseki the perfect start to his tenure by beating Mali 2-1 in the Nelson Mandela Challenge at NMB Stadium in Port ...
Sport
2 years ago

Molefi Ntseki made a successful start as Bafana Bafana coach after Sunday’s 2-1 victory over Mali in the Nelson Mandela Challenge in Port Elizabeth.
Sport
2 years ago

That SuperSport United have been SA’s football cup kings in the last decade of the Premier Soccer League is no joke.
Sport
2 years ago