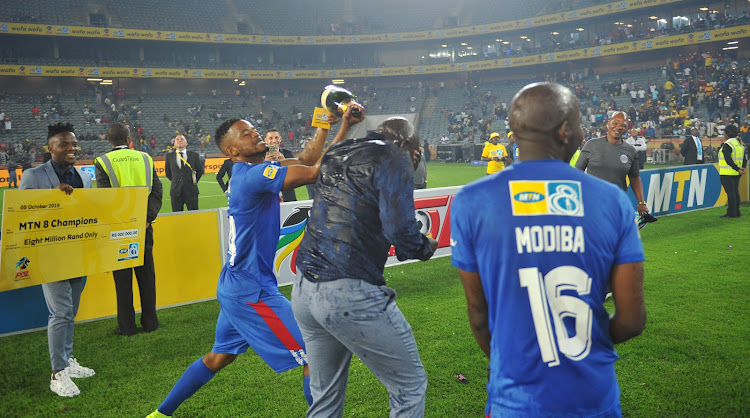 SuperSport United have opened talks with coach Kaitano Tembo over an improved contract after the mentor led the club to MTN8 title two weeks ago.

Tembo is in the final year of a two-year contract‚ which has an option to renew‚ and United’s football manager Stan Matthews said the former Zimbabwean international defender strengthened his case for an improved offer after the club beat Highlands Park 1-0 to win the trophy at Orlando Stadium.

“We are in discussions with him about a two-year extension‚” confirmed Matthews.

“I think we all know that what happened to Eric Tinkler after he won the MTN8.

"No one wants to get ahead of himself but Kaitano delivered us a trophy and every coach who delivers us a trophy will be offered an improved or an extended contract.

"Kaitano will be no different.”

Matthews is confident he will find common ground with Tembo during the negotiations.

“I am pretty confident that he will get a contract extension and hopefully we will wrap that up by the end of the year‚" he said.

"At the beginning of his tenure‚ he signed a two plus contract with us and this is his second year.

"He has earned (the right) to be offered an extension and we would like to improve it‚ but everything is in his hands.”

The MTN8 final appearance was the second for Tembo since he took over the club's coaching job and Matthews said he is being rewarded for his hard work.

“I am delighted that he has won his first trophy as a coach and this one has a special feel to it about it‚" he said.

"In as much as we won trophies with seven coaches‚ he has been with us the longest.

"He was truly groomed because if you remember the amount of time it took Pitso (Mosimane) from being an assistant to a head coach was short compared to Kaitano.

“Kaitano started from the bottom until he eventually became an assistant coach.

"He worked his way through the ranks‚ he prepared himself within our environment and that’s what makes us very special.

"To have a coach who is still with you 20 years later‚ is not by accident.

"He has built himself up and we are proud of him.

"He won trophies with our other six coaches and it gives us confidence that the foundations of this club are strong.”