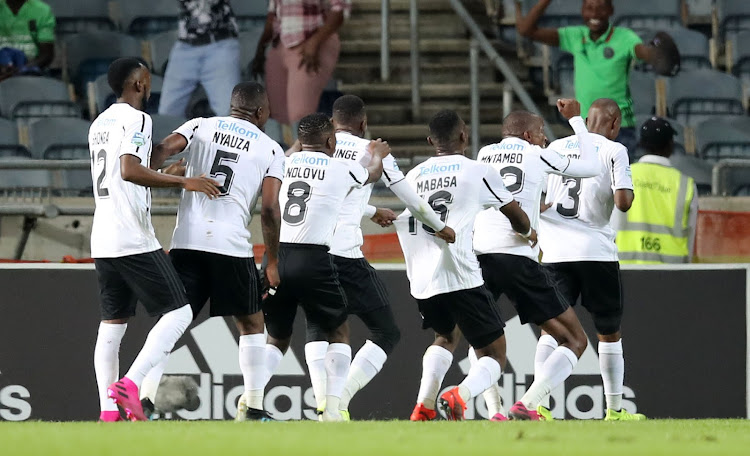 Orlando Pirates made heavy weather of their passage to the last 8 of the Telkom Knockout, missing an avalanche of glaring chances before Thembinkosi Lorch broke the deadlock five minutes from time to eliminate Premier Soccer League (PSL) newcomers Stellebosch FC 1-0 at the Orlando Stadium on Saturday night.

The goal came after Bucs had created a number of opportunities in both halves but failed to get the all-important strike in front of a decent crowd in Orlando.

Credit should be given to Langeveldt and his defence for standing their ground against a Bucs side which wanted an early goal to settle the nerves.

Pirates coach Rulani Mokwena made a number of changes to his regular starting lineup, including the notable one in goals where Wayne Sandilands came in for Joris Delle.

Pirates also had Linda Mntambo joining Fortune Makaringe, Vincent Pule and Lorch in midfield with Augustine Mulenga and Tshegofatso Mabasa deployed up front in what essentially was a flexible 4-4-2 formation.

Mokwena had spoken about the importance of winning this trophy ahead of kick off but what his charges dished out on the field indicated there’s still a lot of work he needs to do.

A defeat would have also put Mokwena’s job on the line as Pirates have already started badly in the league.

Bucs were also eliminated in their first round of MTN8 a few weeks ago after being knocked out in the preliminary round of the Caf Champions League.

Pirates had all the ball in the entire first 45 minutes but the first real test for Langeveldt came in the 16th minute when he had to tip over Mulenga’s pile driver from just outside the area.

Mulenga was again unlucky not to open the scoring in the 26th minute when Lorch and Thabiso Monyane combined well on the right before the latter supplied a cross for Mulenga, whose thunderbolt hit the upright.

For the entire first half the PSL rookies from Cape Town only had one tame shot at Sandilands’s goal.

This came when their top scorer in the National First Division last season, Iqraam Rayners, took a pot shot just outside the area.

Stellenbosch failed again in the second stanza to take the game to their opponents.

Instead their man-of-the-match gloveman Langeveldt was kept busy as Pirates attackers launched attack after attack in search of the winner.

Pirates, who last won the TKO in 2011 when they beat Bidvest Wits 3-1 in the final in their treble-winning season, will visit the same Stellenbosch in their next Absa Premiership match at the Cape Town Stadium on Saturday.

Samir Nurkovic scored a late equaliser as Kaizer Chiefs came from behind to claim a 4-2 victory on post-match penalties against Cape Town City after ...
Sport
2 years ago