Benni McCarthy: 'The referee was terrible‚ he might as well have just put on a Kaizer Chiefs shirt' 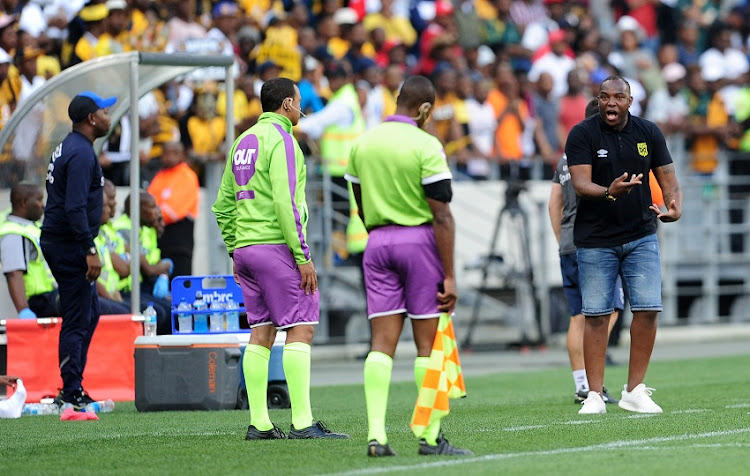 City took the lead through a wonder-strike from Kermit Erasmus‚ but a Samir Nurkovic equalizer late on sent the game to penalties‚ where Chiefs triumphed 4-2 to advance to the quarter-finals.

The home side were very fortunate not to have midfielder Mpho Makola sent off for a clear shove on referee Abongile Tom in the first half‚ but McCarthy still believes the decisions were heavily stacked against his side.

“The referee was terrible‚ he might as well have just put on a Kaizer Chiefs shirt‚” McCarthy told reporters.

“And I hear he is from Cape Town‚ so he had to prove a point that there was no bias. They (the match officials) were useless.”

Tom was‚ however‚ the referee when Chiefs lost 1-0 to TS Galaxy in May's Nedbank Cup final when he awarded a late penalty to the National First Division side.

McCarthy believes that Chiefs have been getting the rub of the green from referees in recent games‚ which has contributed to their fine start to the season.

“No wonder Chiefs won because it was one-way traffic from the referees‚ as it has in the last few games for Kaizer Chiefs.

“The minute you ask (about a decision) you are told‚ ‘hush it‚ or I send you off’. So when they have those kind of powers‚ coaches must say nothing.”

The feisty match had 12 yellow cards‚ six per side‚ but McCarthy believes Tom was too lenient on the AmaKhosi.

“It was one-way traffic‚ everything was going (Chiefs’ way)‚" he continued.

"Craig Martin was getting chopped left‚ right and centre‚ and people say we should have been a player (Makola) less because the referee let us off the hook.

"They (Chiefs) should have been two players less!”

McCarthy was not the only coach unhappy with the officiating this weekend as Lamontville Golden Arrows tactician Steve Komphela‚ usually a cool customer on the sidelines‚ was seen remonstrating with referee Jelly Chavani in the 1-0 extra-time Last 16 victory over Polokwane City.

"The referee was disrespectful and I can never allow that‚” he told reporters.

“The manner he was communicating with me‚ we can never allow such in our game‚ regardless of his job.

“He must learn to respect coaches‚ period. He's probably in his late 20s and I didn't like his attitude.”