Chiefs vs Pirates venue poser: Soweto marathon set to go ahead as planned at FNB Stadium 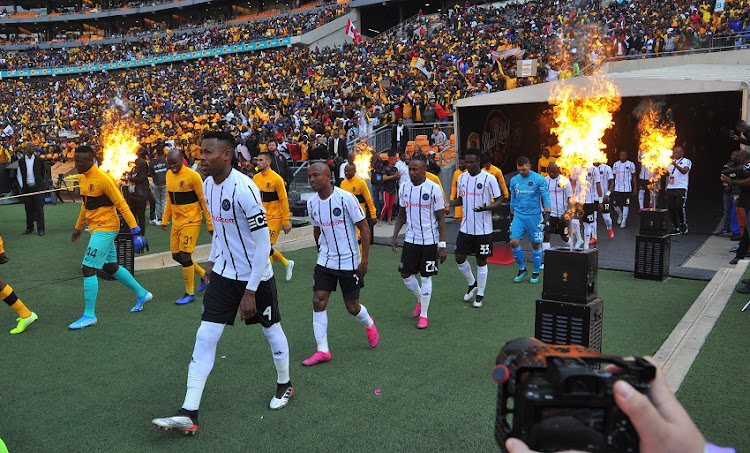 General view teams of walking on the pitch during the Carling Black Label Cup Match between Kaizer Chiefs and Orlando Pirates on the 27 July 2019 at FNB Stadium, Soweto.
Image: Sydney Mahlangu/ BackpagePix

Where will the mouthwatering Telkom Knockout quarterfinal showdown between rivals Kaizer Chiefs and Orlando Pirates be played?

This is the pressing question on the nation's soccer lovers' lips after it emerged that southern Africa's biggest game is unlikely to be played at Chiefs' FNB Stadium homeground as the match would have to be played on the same weekend as the Soweto Marathon next month.

The organisers of the Soweto Marathon confirmed to TimesLIVE on Wednesday that their event would go ahead as planned on Sunday November 3 and this has presented a logistical headache as the Soweto derby is to be played 24 hours earlier.

“From our side‚ the marathon will go ahead as planned but if there is another event taking place at the stadium on that Saturday‚ the stakeholders will guide us.

"There is a JOC (Joint Operations Committee) who will make assessments and tell us what to do‚ but we are going ahead as planned‚” said Skhosana.

Stadium Management SA managing director Bertie Grobbelaar‚ who operate the 2010 World Cup venue‚ said it was possible to host the Soweto derby and the Soweto Marathon on successive days at FNB Stadium.

But he conceded that they would have to overcome serious logistical challenges to pull it off‚ given the immense popularity of the two events.

Grobbelaar said a decision is yet to be taken on the matter.

“Anything is possible‚” said Grobbelaar when contacted for comment on Wednesday.

“We can host the two events on two successive days but it is going to be a huge challenge.

"If Chiefs want to play the match at FNB Stadium on Saturday‚ they will inform us and we will take it from there.

"I had a short conversation with them this morning and they said they will come back to us as soon as possible.”

Chiefs spokesperson Vina Maphosa insisted that the staging of the Soweto Marathon at FNB does not present them as the hosts of the Soweto derby with a crisis as the club have played cup matches away from their home ground in the past.

“This issue of the venue is a non-starter‚ it would be a starter if the match was planned to be played at FNB Stadium‚" he said.

"Our deal with Stadium Management SA is for league matches and our alternative venues are Moses Mabhida and Mbombela Stadiums‚ in that order.”

Premier Soccer League spokesperson Lux September was not available for comment as he was on a flight from East London‚ Eastern Cape.

Peter Leeuwenburg has extended his contact at Cape Town City after admitting he has been surprised at the competitive standard of South African ...
Sport
2 years ago