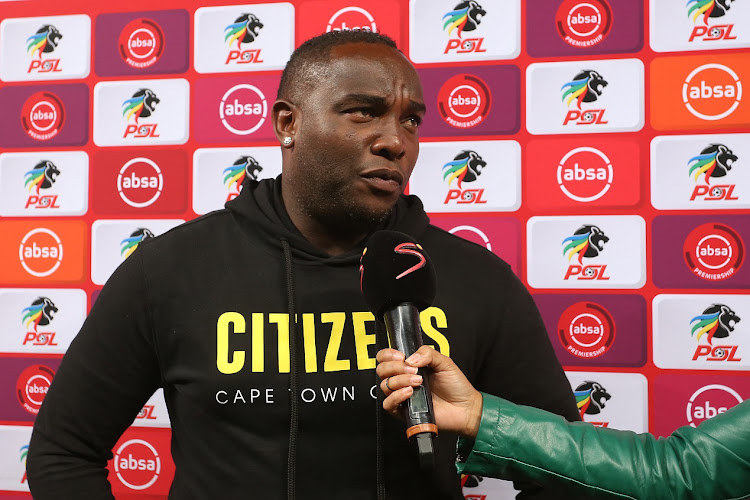 Benni McCarthy admits he is at his wits’ end as Cape Town City continue to stumble and has also called on his players for a reset to avoid the club tumbling into crisis.

City’s winless streak stretched to nine games after losing 1-0 at home to Maritzburg United at a wet Cape Town Stadium on Friday night, leaving them 12th in the Premier Soccer League.

Thabiso Kutumela tucked away a penalty on the stroke of half time after an unlucky handball by defender Keanu Cupido.

It came at the end of another listless first-half performance from McCarthy’s team, who did pick it up in the second half after the coach made changes, but were then wasteful in front of goal.

City coach McCarthy says he is stumped by the results that have seen City posting just one win in 13 games since April.

“Of course I’m worried, I’ve never been in this situation before. The longer it goes on, the more desperate it all becomes,” the coach said.

McCarthy said if the slump was not arrested heads would roll if there was not a lift in form.

“There are going to have to be changes and it will probably start with me, and rightfully so. Maybe it needs someone else to come and change things around,” he said.

“We’ve got a good squad but we’ve got to find that unity that is missing again. That team spirit that was so good for us last season.”

McCarthy suggested City players were too worried about their slick footballing approach and forgetting the grind that had seen them come out of several sticky situations last season.

He also said they had been much more motivated for last weekend’s Telkom Knockout tie against Kaizer Chiefs — lost on penalties — and did not show the same zip ahead of Friday night’s game.

“It will be tough now motivating players for the next game if you feel there is little concern — they are more worried about themselves than the team,” McCarthy said.

“The coach ends up sounding like a broken record because he says the same thing over and over again.”

Benni McCarthy: 'The referee was terrible‚ he might as well have just put on a Kaizer Chiefs shirt'