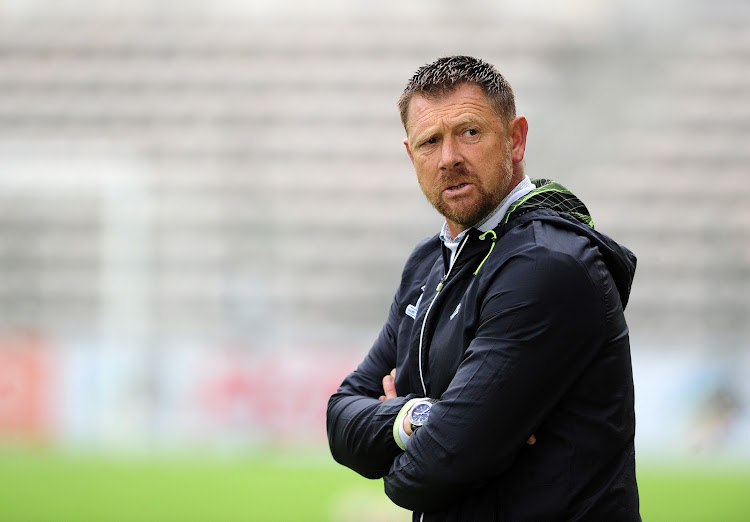 Eric Tinkler is on record saying his Maritzburg United team is too good to be relegated.
Image: Ryan Wilkisky/BackpagePix

Maritzburg United’s upset victory away at Cape Town City at the weekend is hopefully the catalyst for more self-belief from the players‚ says coach Eric Tinkler‚ whose side are now into the top eight in the league standings.

After three successive league wins‚ Tinkler wants the club to keep up their momentum when they host Highlands Park on Friday night in the first of the weekend’s Telkom Knockout quarter-finals.

“It is very important to keep winning and the one thing I haven’t entirely understood about my players because after winning three games in a row they still look to have a bit of trepidation about them‚” he said.

Tinkler was critical of the way his side dropped back into defence and allowed Cape Town City the majority of the possession after going 1-0 up in their league game at the Cape Town Stadium on Friday.

But Maritzburg tenuously hung on for all three points in a shock away win.

“They are not sure to whether to go back or commit forward but I think the more wins that come‚ the more confidence will grow.

“And that confidence will grow not individually but collectively because the players will start trusting what’s happening behind.

“But that should be happening already because if you check our record‚ we haven’t been conceding a lot of goals‚” Tinkler added.

Maritzburg have conceded just five in eight league games‚ which is the joint lowest along with leaders Kaizer Chiefs and third-placed Wits.

They conceded one more in the first round of the Telkom Knockout when they edged Wits on post-match penalties.

Benni McCarthy admits he is at his wits’ end as Cape Town City continue to stumble and has also called on his players for a reset to avoid the club ...
Sport
2 years ago

Mosimane takes aim at the Soweto derby: 'I don’t know if Pirates fans will allow it'

Fiery Mamelodi Sundowns coach Pitso Mosimane kept up his attack on Kaizer Chiefs and said his rivals have the match officials to thank for their 2-0 ...
Sport
2 years ago