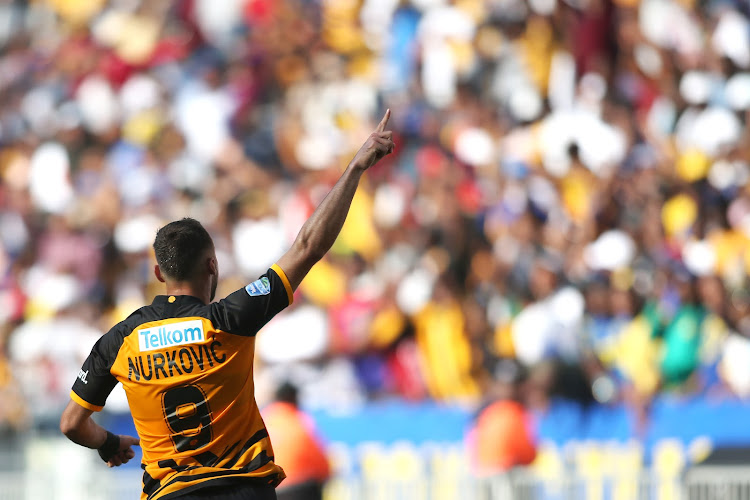 Samir Nurkovic came off the bench to score a late equaliser for Kaizer Chiefs and force the match into extra time.
Image: Shaun Roy/Gallo Images

Kaizer Chiefs coach Ernst Middendorp has praised the work rate of his Serbian striker Samir Nurković‚ who scored a brace during their 2-0 win over rivals Mamelodi Sundowns at Loftus on Sunday.

Nurković scored in either half to give Chiefs the much needed morale-booster ahead of the Telkom Knockout‚ quarterfinal showdown against Orlando Pirates on Saturday and also to hand Sundowns their first league defeat of the season.

“His work rate is exceptional‚” said Middendorp who has guided Amakhosi to the top of the Absa Premiership standings with 22 points from 9 matches.

“I think this is something that we are not having in SA soccer.

Middendorp also praised the 27-year-old for his willingness to learn from his team-mates since he joined Amakhosi as an unknown during the off-season.

“The influence is not only his own actions‚ it comes in the direction of team mates who are on the side because he is prepared to cover‚ to run to move.

"Other players are getting inspired by this and it is a clear impact that he has given to the team with what he is doing.”

With Chiefs leading the pack at the moment in the league‚ Middendorp said it’s too early to start talking about winning the championship that has eluded them since the 2014-2015 season.

“It is not running away‚ we won a game today and that is all.

"I am not going to spent too much time talking about whatever is going on in the league.

"If you start now to have sweetness in your eyes and celebrating‚ you will have a big problem towards the end of the season because after two or three games it may be totally different.”