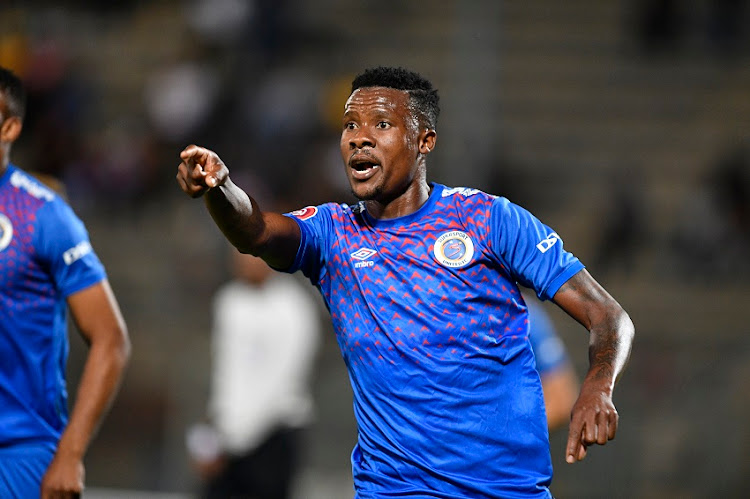 SuperSport United in-form striker Thamsanqa Gabuza is one of the players on standby for the back-to-back 2021 Africa Cup of Nations qualifying matches against Ghana and Sudan next month.

With a couple of league and cup matches still to be played in the Premier Soccer League (PSL) before Bafana assemble and leave for Ghana on the 10th of November‚ Ntseki admitted there could be a need to replace injured players.

Gabuza’s name did not appear among the three strikers – Kermit Erasmus‚ Bradley Grobler and Lebo Mothiba – that Ntseki announced on Tuesday‚ but the Bafana coach immediately revealed that the former Orlando Pirates marksman is among the players on the fringes to make a return to the Bafana squad.

Ntseki was not keen to reveal all the players on standby but when it comes to Gabuza he couldn’t hide his admiration for the striker who was very much part of the Bafana team during Shakes Mashaba’s tenure between 2014 and 2016.

The 32-year-old striker‚ who made his Bafana debut in June 2015 in a match against Angola‚ has 16 caps and six goals in the senior national team colours.

“Somebody earlier on was asking me about Gabuza to say is he in the team?‚ I said no unfortunately for him he’s not in the team‚” said Ntseki.

“But he’s one player we’re tracking and we’re very impressed with his performances‚ when the right time comes he will be considered.”

Apart from Gabuza‚ the Bafana coach said he has a contingency plan to replace whoever will be injured before the two matches.

“When it comes to the players it will be about the injuries if ever something happens to any of the players selected‚” said Ntseki whose first match as Bafana mentor was a 2-1 win against Mali in the Nelson Mandela Challenge early this month.

“We’ll always have a back-up plan of the players that will be coming in. But I don’t want to refer to them as back-up players‚ I want to refer to them as players that couldn’t make it into the squad but are likely to be brought into the squad any time. So I’m not going to make mention of those players but I have those players in terms of defenders‚ goalkeepers‚ midfielders and strikers.”

Ntseki said in was very important that they handle the recovery process well so that players perform well when they are in the national team.

“We’re fully aware (of the heavy PSL programme) and I think we’ve got the best conditional trainers in the country. So in terms of loading and the recovering I think we know how to handle situations like that.

“Like the last time when SuperSport played Highlands Park in the MTN8 final‚ we gave the three SuperSport players (Dean Furman‚ Grobler and Ronwen Williams) two days off without training so that they have a better recovery. And with that recovery Dean Furman was a man-of-the-match against Mali. So I think in terms of the recovery and managing the recovery process we are doing very well.”