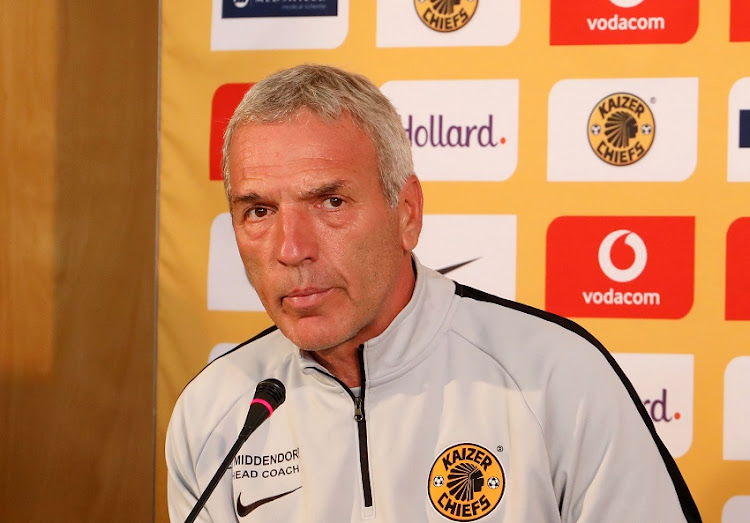 Mokwena’s propensity for changes to his XI – exacerbated by the need to rest players ahead of the coming week’s two derbies‚ and by Bucs’ lethargic form – makes it difficult for an opposition coach to speculate who might play on a given day for Pirates.

Middendorp‚ though‚ said he has been able to study Pirates’ playing patterns and the traits of individual players as preparation for Saturday’s huge cup tie in Durban.

“Of course if you have a number of players brought in [to your squad]‚ and here and there certain results are not coming – that’s one reason [for Pirates making changes]‚” Chiefs’ coach said.

“A second reason‚ of course‚ is that you always look into the way of playing by your opponents.

“[Be it] Stellenbosch in the two games before‚ knowing that they have a deep-sitting defence. Highlands Park are known for man-marking.

“And of course the next point is to what extent your players are doing the job‚ are fit‚ are prepared‚ are hungry.

“I see the changes [at Pirates]‚ yes. But I can’t really give you a reason for it. That’s something that they have to decide on their side.

“Despite that‚ you still see certain elements of how they do stuff. In the forward movement‚ and what you can identify from certain players. Some have not been on the field‚ and probably will be on Saturday.

“But that is not my job. We have our own ideas. In the end I’m interested in having qualification for the next round.”

Mokwena‚ as caretaker-coach‚ has started 23 different players in his 10 league and cup matches since the departure of head coach Milutin Sredojevic three games into their season left Bucs reeling.

It has seemed unwise‚ given the need to steady‚ not destabilise‚ the ship.

In his last five matches Mokwena made three changes from a 4-3 win against Bidvest Wits to a 3-3 draw against Cape Town City‚ then five from that game to a 1-0 win TKO against Stellenbosch.

The coach made just one change from that victory to a 1-0 shock at the hands of Stellenbosch in the league‚ then five changes to Tuesday night’s 1-0 win against Highlands Park at Makhulong Stadium.

What would seem concerning for Pirates‚ who have at times been porous in defence this season‚ is that in those five games Mokwena changed centreback combinations five times.