Gabuza and Grobler can get even better together, says SuperSport coach Tembo 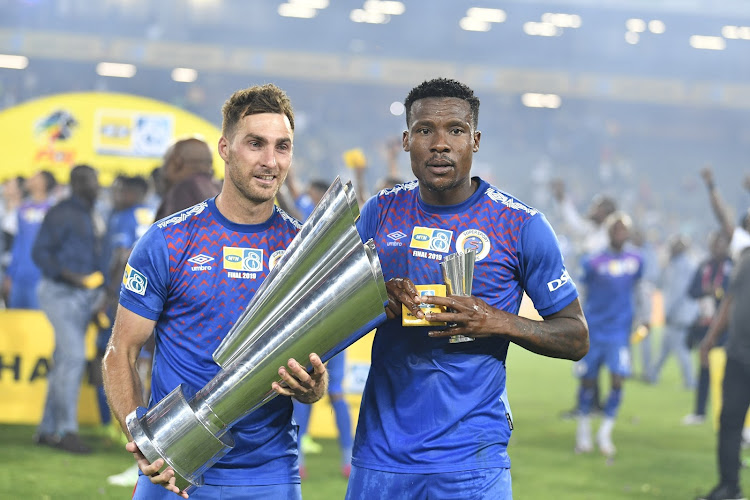 SuperSport United strikers Bradley Grobler and Thamsanqa Gabuza with the MTN8 trophy after their team's 1-0 win in the final against Highlands Park at Orlando Stadium on October 5.
Image: Lefty Shivambu/Gallo Images

SuperSport United coach Kaitano Tembo is thrilled with the growing partnership between Thamsanqa Gabuza and Bradley Grobler, but feels there is still much to come from the pair.

The duo have already shaken up Absa Premiership defences and combined to help the club win the first trophy of the new campaign, the MTN8, last month.

Between them have netted seven league goals and six in cup competition (13 in total) this season and will be key as SuperSport set their sights on the Telkom Knockout in Saturday’s quarterfinal against Lamontville Golden Arrows at Mbombela Stadium.

“Gabuza and Bradley really complement each other. Bradley is very good in terms of his movement, and also he’s an intelligent player who can benefit from playing alongside Gabuza,” SuperSport boss Tembo told TimesLIVE on Friday.

“His timing of his movement and his first touch is very good as well.

“Whereas Gabuza’s work ethic is unbelievable. He’s one player who will take all the attention away from the others, drawing out the defenders with his hard work and tiring them out.

“He’s also good on the ball, he holds it up well and that allows other players to join in as well. We can play off him – he’s a very good outlet.”

Tembo says SuperSport had no hesitation signing the 32-year-old Gabuza when he was surplus to requirements at Orlando Pirates.

“What made us sign him is that he is a typical No. 9,” the coach explained.

“In this league, if you have a player of Gabuza’s calibre you are always going to create opportunities to score goals.

“They are rare in this league. Look at how well [Samir] Nurkovic is doing at Chiefs. He’s a different type of player, like a Pollen Ndlanya. Big and strong and who can hold the ball. PSL defenders struggle against strikers like that.

“So, I knew that if we bring in someone like that, it will benefit our quick attacking players like [Evans] Rusike, Aubrey Modiba and Bradley.”

Gabuza and Grobler, who is 31, also bring considerable experience and Tembo was always confident they could work well together.

“I knew that at some point it was going to click but it has happened surprisingly earlier than I thought, to be honest,” he said.

“I didn’t think it would happen so soon. But there is still a lot of improvement to come too and they still have a lot to offer.

“It’s still too early,” he concluded.

Teammates hail Gabuza for bravery in the midst of personal tragedy

SuperSport United skipper Dean Furman and striker Bradley Grobler were as stunned as everyone when their team mate Thamsanqa Gabuza told them about ...
Sport
2 years ago

Bafana Bafana striker Bradley Grobler has said that a new fitness training team at SuperSport United put him in top shape in the preseason‚ which has ...
Sport
2 years ago