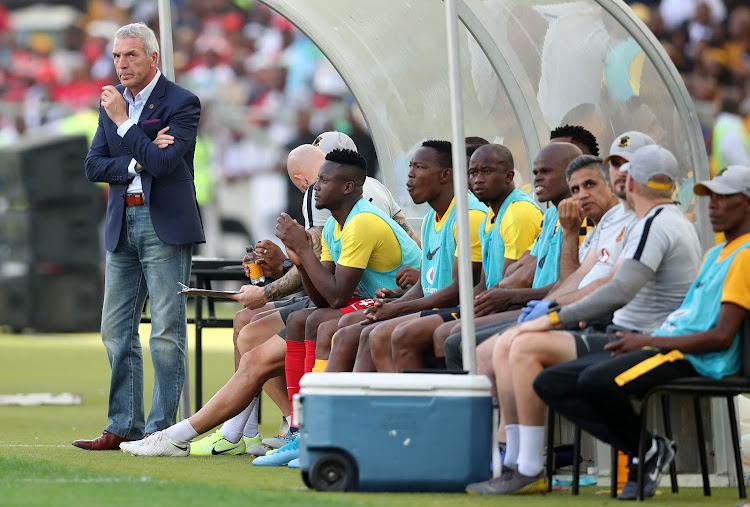 Kaizer Chiefs coach Ernst Middendorp was quick to remind that his team has achieved nothing so far and that they still have a lot of work to do.
Image: Samuel Shivambu/BackpagePix

Shortly after they confirmed their place in the semifinals of the Telkom Knockout in Durban‚ Middendorp was not in a celebratory mood and preferred to point out some defensive errors he observed from the sidelines.

Chiefs conceded two goals from Fortune Makaringe in the first half and Gabadinho Mhango early in extra-time and Middendorp believes they could have defended better.

“Soccer is a game of mistakes‚ we haven’t really been fantastic at the back and it showed with how we conceded‚” said.

Middendorp‚ who is faced with an Absa Premiership clash against Chippa United in Port Elizabeth on Wednesday‚ said despite the two goals they conceded he is satisfied with the manner in which his players approached the shoot-outs.

“We have built confidence game by game and you could see even during the shoot-outs that players were not running away'" he said.

"This is a very clear indication that they have built up confidence and they showed the belief.

“If you want to have a sustainable structure of success‚ don’t be quiet‚ be stubborn and that is special aspect in my character.

"We have to challenge ourselves and not be satisfied that we are in the second round. There must always be a drive and energy to want to do more.”

Chiefs scored their two goals after the dismissal of Pirates defender Mthokozisi Dube in the 50th minute but Middendorp said playing a team with a man down is never easy.

“Most of the time it gets difficult because players start relaxing thinking that they have to work less harder‚" he said.

"We brought in Bernard Parker with his experience and we pressed highline‚ but it is difficult because the opponents wait for the counter and for your mistakes.

“It was the result that we targeted to get to the next round and it was a highly entertaining game.

"It’s always something special with a performance like this in the derby. We were 1-0 down and it could have been different but you have to take risks.

"We had the right mentality‚ discipline and attitude towards the game and we are satisfied with the result even if it was on penalties.

"Pirates have a bunch of good players everywhere.

"I was aware of it and I am looking forward to the next derby on Saturday. But our concentration goes to the game on Wednesday against Chippa.”

A team who looked ordinary and in a meltdown last season appear to be in business this campaign.
Sport
2 years ago

Kaizer Chiefs have been drawn at home to Maritzburg United in the semifinals of the Telkom Knockout as they bid for their first piece of silverware ...
Sport
2 years ago