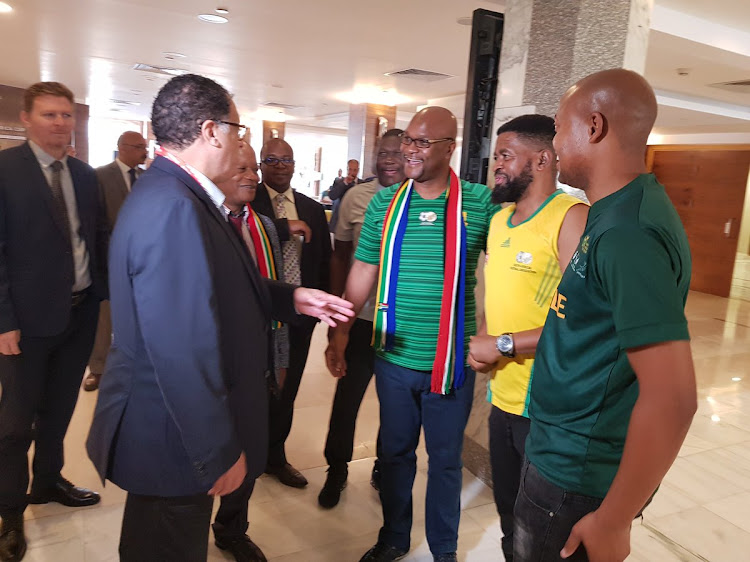 A decision on whether government’s planned Ministerial Football Indaba will go ahead will be made in the next few days after sports‚ arts and culture minister Nathi Mthethwa returns from Japan.

Mthethwa accompanied President Cyril Ramaphosa to the Rugby World Cup final and is only due back on Tuesday afternoon‚ around the same time as members of the victorious Springbok side are all set to touch down on home soil.

Top of his agenda on his return is to make a decision on the Indaba‚ due to be held in Johannesburg from November 15-17‚ after the SA Football Association (Safa) refused to have anything to do with it.

Sports ministry officials have told TimesLIVE that the non participation of Safa comes as a major problem to the effectiveness of the Indaba.

Mthethwa wanted a broad discussion with major role players from all aspects of the game to find a solution to making South African teams‚ particularly Bafana Bafana‚ more successful on the international stage‚ plus seeking a solution to poor attendance at most of the domestic football games.

But last week‚ just when Mthethwa was sending out invitations‚ Safa banned any participation by its members.

Safa says the indaba amounted to political interference in the football‚ which ran the risk of the country being banned by Fifa.

It also said it had held a recent Indaba to plan for the future and from it produced its Vision 2022 document. This had been presented to Mthethwa.

Any Indaba on the health of the game should be the prerogative of Safa‚ not the government‚ it added.

Mthethewa is now in a bind as he considers what to do – go ahead with the Indaba without any meaningful input from the soccer community or cancel the event and suffer a humiliating slap-down.

The South African Football Association (Safa) have effectively told the Sports Minister to ‘get back in his box’ and say they will have nothing to do ...
Sport
2 years ago

Sports minister Nathi Mthethwa has confirmed that the much-talked about and anticipated National Football Indaba will take place next month.
Sport
2 years ago

Sports Minister Nathi Mthethwa will host a National Football Indaba during the current financial year in a bid to address consistent problems ...
Sport
2 years ago