Eric Tinkler not happy with his players after draw with Pirates 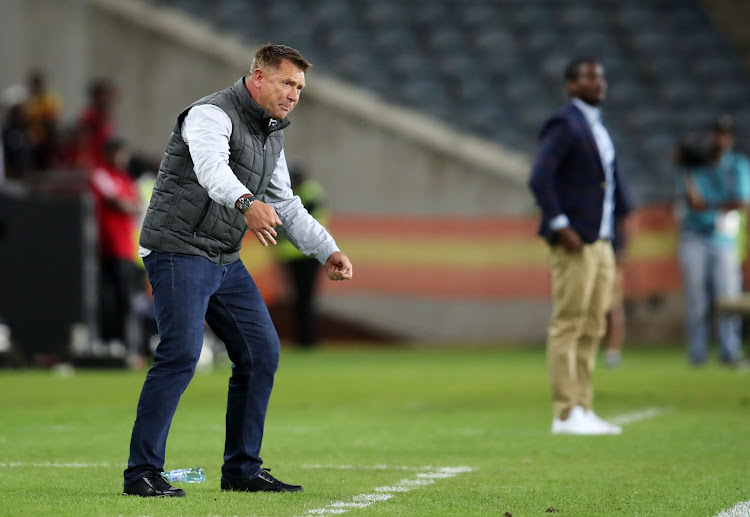 Maritzburg United Eric Tinkler is of the opinion that his team deserved more than the one point they got against Orlando Pirates.
Image: Muzi Ntombela/BackpagePix

Eric Tinkler admitted that if you had offered him an away draw at Orlando Pirates for his Maritzburg United team on Tuesday night he would have happily taken it.

But the tough-talking coach still had some stern words for his players after the goalless draw.

Maritzburg kept a clean sheet for a fourth successive league match as they held out for a precious point at the Orlando Stadium‚ but Tinkler was not pleased.

“To be honest I don’t think we performed very well... maybe it was an off night for us‚" he said.

“I think we looked physically tired‚ mentally tired and a lot of players didn’t play with the intensity we needed.”

Eric Tinkler says his @MaritzburgUtd charges lost an opportunity to hurt an "off form" @orlandopirates in the goalless draw at Orlando last night. The Team of Choice have conceded just 5 goals in 9 matches with keeper Richard Ofori managing 5 clean sheets so far, the highest. pic.twitter.com/V4w0VaZEan

Tinkler said the drain of playing extra time and then having to go through a penalty shootout out against Highlands Park in last Friday’s Telkom Knockout quarter-final probably contributed.

“We were a little fortunate to a degree that Pirates weren’t in top form either‚" he said.

"Yes‚ they had opportunities but I think it was also an opportunity for us to hurt them.”

He felt that Maritzburg could have been a lot more committed when they had chances on the counter.

Blow for Tinklee as Kwanda Mngonyama was red carded vs Pirates last night but @MaritzburgUtd coach says it was actually the loss of De Reuck, who came off limping, that will hurt his team at the back where only 5 goals were let in in 9 #AbsaPrem outings. pic.twitter.com/rloU3tS7Zm

“If we showed a little more creativity and less fear to get forward‚ we could have taken it‚" he said.

“The saves that our goalkeeper Richard Ofori had to make came not from the creativity of Orlando Pirates but from a lack of intensity from us.”

Maritzburg will have little time to recover before their next game on Friday at home to Bloemfontein Celtic‚ who won on Tuesday by beating Highlanfds 3-1 at home.

For Maritzburg‚ it will be a third game in seven days.