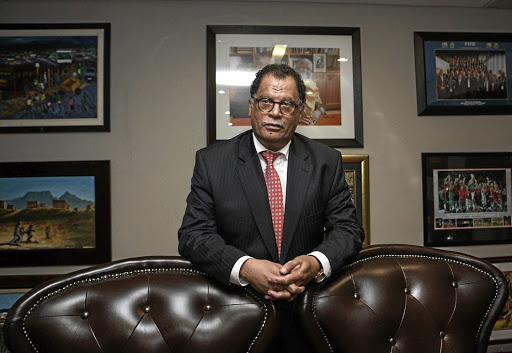 SA Football Association (Safa) president Danny Jordaan hopes that disruptions to the South Africa Under-23 team's preparations ahead of the upcoming U-23 Africa Cup of Nations do not derail their qualification for the Tokyo Olympics.

Jordaan acknowledged that reaching Tokyo 2020 for a team who have progressed together and displayed their potential by reaching the 2015 Fifa Under-15 World Cup and 2017 and 2019 U-20 World Cups was crucial in the concluding phase of Safa’s "Vision 2022".

That masterplan envisages Bafana Bafana qualifying for the 2022 World Cup in Qatar, and being competitive there.

But a crucial cog in the plan has been disrupted by U-23 coach David Notoane departing for the U-23 Nations Cup in Egypt on Monday with just 15 players for SA’s tournament opener against Zambia at Cairo’s Al Salam Stadium.

With the beginning and end of the U-23 Afcon falling outside Fifa’s international date, Premier Soccer League and overseas-based clubs' reluctance to release players until obligated mean that Notoane will only have a full squad in the middle of the tournament.

“The Under-23 team that we have now is probably one of the best, if not the best, in our history,” said Jordaan.

“And you saw it in the qualifiers, where they wiped out everybody – Angola, Zimbabwe – by huge margins. And the coach is confident that it’s not just about qualification for Tokyo, they are there to win the U-23 Afcon.

“Of course, this [player withdrawals] has disrupted his plan … In Egypt, SA are the only team there without their best XI. All the other teams – Nigeria, Cote d’Ivoire, Zambia – have their best XIs."

The top three teams at the U-23 Nations Cup reach the Tokyo Olympics. SA are seeking a second qualification in succession, having reached the 2014 Games in Rio.

David Notoane tells his under-23 players to dream bigger

South Africa Under-23 coach David Notoane has told his players to look beyond the 2020 Olympics and cast their gaze wider to the 2022 and 2026 World ...
Sport
2 years ago

SA Football Association (Safa) president Danny Jordaan has played down comparisons between the performances of the Springboks and Bafana Bafana‚ ...
Sport
2 years ago