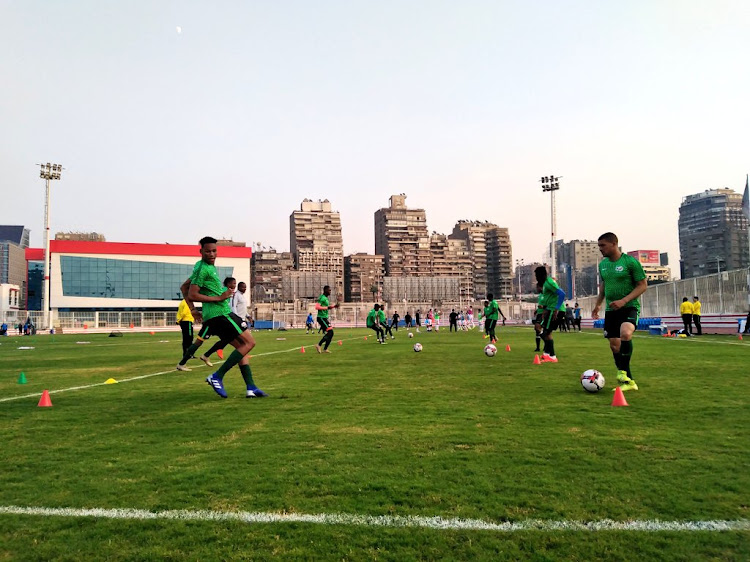 SA Under-23 coach David Notoane breathed a huge sigh of relief on Thursday morning when his squad was boosted by the arrival of three players a day before the start of the eight-nation Africa Cup of Nations tournament in Egypt.

Notoane's preparations have been hampered by the unavailability of players as part of the under-23 tournament falls outside of the Fifa calendar.

He will have been elated when goalkeeper Mondli Mpotho‚ striker Keletso Makgalwa and skipper Tercious Malepe joined the camp in Cairo as he can now select his starting 11 from 15 players.

“The three players arriving have pushed our numbers to 15 and it improves the quality of the team‚” a jubilant Notoane said on Thursday morning.

“We appreciate the support from the clubs Mamelodi Sundowns (Makgalwa) and Bloemfontein Celtic (Mpoto)‚ and of course Tercious (Chippa United) got a red card against Sundowns.

SA Under-23 Olympic team captain Tercious Malepe, Mondli Mpoto and Keletso Makgalwa report for camp ahead of South Africa's U-23 AFCON Group B Opener against Zambia this Saturday.
The match will take at the Al Salam Stadium.
Kick-off is at 20h00. pic.twitter.com/B9ZkvK8xs0

“But we’re happy that they released him (Malepe) in any case because they could have kept him as agreed. We are really grateful.

“At least it gives us positivity and inspiration going to our game against Zambia.”

The SA team have to finish in the top three in the tournament to book their ticket to next year’s Olympic Games in Tokyo‚ Japan.

Notoane’s team face Zambia at 8pm (SA time) on Saturday in their first Group B match before meeting Ivory Coast on November 12 and Nigeria on November 15. Six more) expected to land in Egypt on Monday‚ a day ahead of the Ivory Coast clash.

Egypt‚ Cameroon‚ Ghana and Mali are in Group A and will kick-off the tournament with their matches on Friday.

Dumisani Zuma scored twice as Kaizer Chiefs increased their lead at the top of the Premier Soccer League table by beating injury-plagued Chippa ...
Sport
1 year ago

AfriForum said it hoped that leading its own investigation into the death of Orlando Pirates and Bafana Bafana soccer player Senzo Meyiwa would ...
News
1 year ago

Sports minister Nathi Mthethwa says it would be a tragedy if Safa officials stuck to their guns and snubbed the Football Indaba he has proposed for ...
Sport
1 year ago

Orlando Pirates paid a heavy price as they not only dropped home points against Maritzburg United in a goalless draw at Orlando Stadium on Tuesday ...
Sport
1 year ago

We hear directly from the leaders of the pack that made history by delivering the third Rugby World Cup to these shores, Siyamthanda Kolisi and ...
Sport
1 year ago