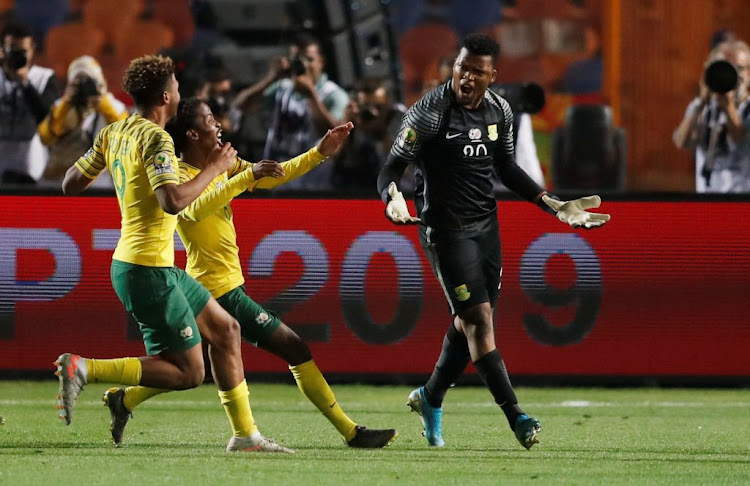 Mondli Mpoto saved two penalties in the shoot-out as South Africa booked their ticket to the 2020 Tokyo Olympic Games with a 6-5 penalties win following a 2-2 draw with Ghana in the third-place play-off at the 2019 Africa Under-23 Cup of Nations in Cairo on Friday.

It was ultimately a deserved victory for the side and should have been wrapped up in ordinary time had they not spurned so many chances, but it is a case of job done as they qualified for back-to-back Olympics following their appearance in 2016, and join Egypt and Ivory Coast as Africa’s representatives.

Ghana had a kick to win the shoot-out that was blazed high over the crossbar by Edward Sarpong, and outstanding goalkeeper Mpoto made him pay with two saves as 16 kicks were needed to get a winner.

South Africa were ahead thanks to an own goal from Habib Mohammed, but the superb Evans Mensah levelled for the West Africans. Kamohelo Mahlatsi put South Africa back into the lead and it looked as though they would hold on for the win before Samuel Obeng equalised with five minutes remaining.

South Africa coach David Notoane could not hide his frustration after his side were on the receiving end of a shocking refereeing decision in their ...
Sport
2 years ago

South Africa may have had to settle for the bronze medal at this tournament, but there is definite ‘gold’ in this exciting Under-23 side that bodes well for the future of Bafana Bafana, especially as coach David Notoane was missing a number of players.

He brought striker Lyle Foster back into the side and selected goalkeeper Mpoto for the first time in the tournament, Darren Johnson playing the price for his howler in the semifinal defeat to Egypt. Grant Margeman was also drafted back in to freshen the midfield and caught the eye with his work-rate and vision on the ball.

But it was Ghana who started the brighter and they created a couple of half-chances in the opening 15 minutes before South Africa settled.

They were ahead when Luther Singh drove in a low cross from an acute angle which went into the net via a deflection off Ghana defender Mohammed, just the second goal the side scored in their fifth game at the tournament.

Teboho Mokoena and Keletso Makgalwa both shot inches wide as South Africa were suddenly on top and looking for the insurance of a second.

They botched a superb opportunity to add to their tally when Margeman’s run down the left ended with a ball into Foster in the box. The striker laid the pass off to Makgalwa, but with just the keeper to beat, the forward seemed undecided whether to shoot or pass and was eventually crowded out by defenders.

Moments later Foster had the ball in the net but was adjudged to have fouled Habib by referee Boubou Traoré from Mali, when replays suggested it was a legal shoulder-to-shoulder contest between the pair.

Makgalwa was then hauled down on the edge of the box after a late, wild lunge by Ghana midfielder Lomotey Addoquaye but Traoré waved play on as the officiating slipped into the realms of ridiculous.

A controversial penalty from Ramadan Sobhi set Egypt on the way to a 3-0 win over South Africa in their 2019 Africa Under-23 Cup of Nations semifinal ...
Sport
2 years ago

More excellent South Africa play saw Foster meet Margeman’s cross with his head, but the looping effort bounced on top of the crossbar and out as they had to settle for a 1-0 lead at the break.

South Africa continued to press at the start of the second half, but Ghana found a leveller with a stunning strike from Mensah.

The strike from 30-yards was always swerving at pace away from Mpoto, who could do nothing to keep the ball out. But substitute Mahlatsi put South Africa back in front when Foster’s fortunate touch left him with just Ghana keeper Kwame Baah to beat and drilled his shot into the goal.

Foster almost got behind the Ghana defence with 15 minutes remaining, but his left-footed shot was well wide, while at the other end Mensah blazed over the bar when he should have at least hit the target.

A super move put Mahlatsi in space in the box after a pass from Kobamelo Kodisang, but his shot was narrowly wide of the far post when he had two options in the middle. Singh’s superb pass put Kodisang in behind the defence, but he produced neither a shot nor a cross as he thrashed the ball high and wide.

They were made to pay when Ghana found a second equaliser on 85 minutes when more brilliant play from Mensah saw him cross from the right and Obeng scored on the turn to send the game to penalties.

Coach Helman Mkhalele will lead the South Africa side at the 2019 COSAFA Under-20 Championships in Lusaka from December 4-14‚ where the team will ...
Sport
2 years ago