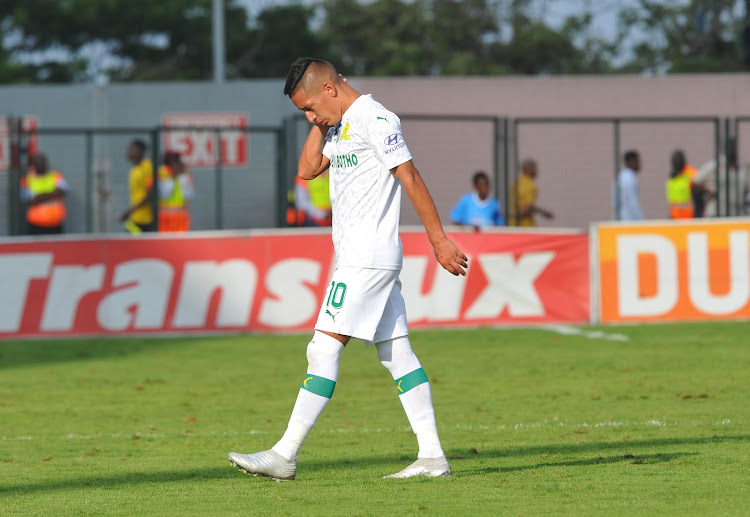 Mamelodi Sundowns coach Pitso Mosimane says he’s no psychologist and does not have answers on how to deal with temperamental playmaker Gaston Sirino.

Sirino was shown the red card by referee Victor Gomes for a career-threatening tackle on Lamontville Golden Arrows captain Matome Mathiane when the two sides met in the semifinals of the Telkom TKO at Sugar Ray Xulu Stadium at the weekend.

“How do you deal with Phiri with yellow cards every day?‚” he asked.

‘‘How do you deal with Katsande with yellow cards every day. It is our lives here.

‘‘It’s those kinds of players like Roy Keane that you always know they will put you in that space all the time‚ because they can’t control their temper‚ their temperament.

But Mosimane conceded that Sirino deserved to be sent off and described the player as ‘‘naughty” after committing the dangerous tackle.

‘‘He is naughty. He went over the ball‚ it’s a red card straight.”

SA under-23 coach David Notoane has called on the SA Football Association (Safa) and the Premier Soccer League (PSL) to hatch a plan to give him the ...
Sport
1 year ago

South Africa Under-23 coach David Notoane has called on the South Africa Football Association (Safa) and the Premier Soccer League (PSL) to hatch a ...
Sport
1 year ago

Ernst Middendorp might not have worked with many of Maritzburg United’s current players but says he has kept close tabs on matters at his old club‚ ...
Sport
1 year ago