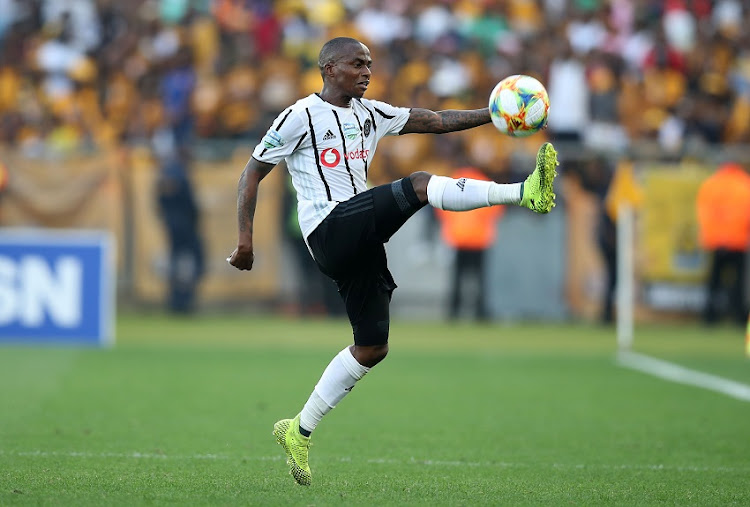 Lorch received a red card in the league match against Polokwane City at Orlando Stadium on Tuesday night and while Mokwena conceded that the Pirates player deserved to be sent off‚ he still sang his praises.

The Footballer of the Season is yet to scale the heights that won him the accolade in the previous campaign‚ but Mokwena would hear none of it.

“If someone wants to argue with me‚ then we can argue‚ because I talks stats‚ maybe with others it's an opinion‚” said Mokwena.

“The Footballer of the Season award is at Thembinkosi Lorch’s house and he’s still the best player in the country.”

Lorch was handed a red card by referee Masixole Bambiso after he clashed with Polokwane forward Puleng Tlolane‚ who was also sent to an early shower.

Tlolane blasted the ball at Lorch after a tackle and when the Pirates player lashed out‚ the two then tried to fool Bambiso by diving to the ground moments after pushing each other.

“We got the red card‚ deservedly I think‚” said Mokwena.

The Premier Soccer League (PSL) have acceded to Mamelodi Sundowns’ request to postpone their league match against Stellenbosch FC in Cape Town on ...
Sport
2 years ago

“I think it is a red card for retaliation.

"Nyoso (Lorch) shouldn’t have retaliated but we spoke to him about it.

“After he was fouled they kicked the ball towards him.

"With a little bit more of emotional intelligence he could have avoided the situation.”

Mokwena‚ however‚ dismissed suggestions that his talisman could be wilting under the weight of expectation after he was named as the best player in country last season.

“You see‚ unfortunately we forget that he’s still the reigning Footballer of the Season‚” said Mokwena.

“Sometimes I think we put undue pressure because of social media and some of the things that he reads.

“The expectations are based more on that.

"I’m always telling him that he’s still the best player in the country.

“Who has the award of Footballer of the Season at home? It’s Thembinkosi Lorch.

“So he’s got nothing to prove to anybody.

"I think some of the incidents are difficult to assess.

“The incident‚ as much I say it is definitely a red card‚ it’s an unfortunate one because he was fouled.”

Pirates won the game 3-2 courtesy of goals from Gabadinho Mhango‚ Kabelo Dlamini and Tshegofatso Mabasa‚ who scored his sixth league goal of the season.