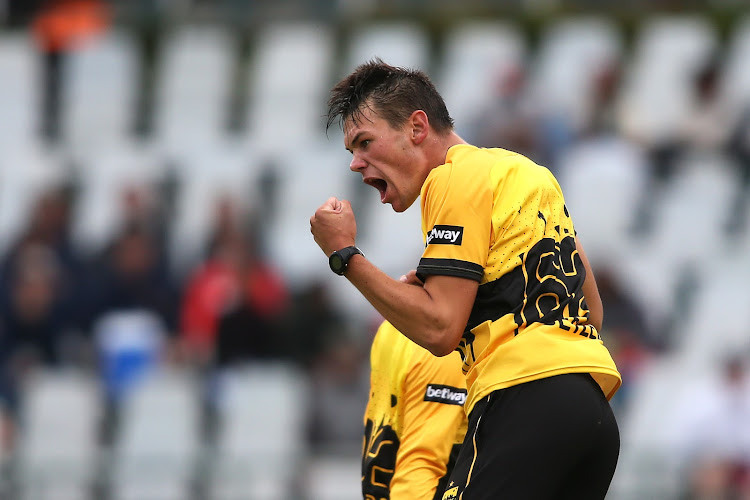 Talented paceman Gerald Coetzee is quietly making a name for himself on the domestic circuit.
Image: Shaun Roy/BackpagePix

The talented young pacemen‚ who has already made waves at franchise level for the Knights‚ pulled up with a hamstring issue in a Mzansi Super League game for the Jozi Stars against the Nelson Mandela Bay Giants last month.

“Gerald has worked hard. He ran a 2km time trial the other day and he's on track. We're hoping by the time the quadrangular series starts‚ he'll be 100 percent.

SA's Under-19's have had a rough time of it in the past year.

They were whitewashed in a seven-match series against Pakistan in June and July while they were well beaten by India on tour earlier this year.

SA open their World Cup account against Afghanistan in Kimberley on January 17.

They are also in Group D‚ where they've got matches against Canada and the United Arab Emirates.

While Mahatlane is hoping for a play-off spot‚ the team's growth has been the important part for Mahatlane.

“18 months ago‚ we won a series in England. If you think of India‚ it was a tough tour and it always is for any team. Pakistan had a Test opening bowler in their team and for young players‚ it's about growth.

"The good thing about this program is how quickly players can grow‚” Mahatlane said.

“The biggest thing for us is just exposing the kids. If you look at the games against the Emerging Sides‚ they had guys like Wandile Makwetu and Dayyaan Gallium.

"When you play against guys who've been around‚ you then start adjusting to the fact that you're no longer playing school cricket.

"It's not only about surviving the good bowler and cashing in‚ but it's about how can I start scoring off good balls? I think we've improved in that regard.”

Cricket SA have begun the attempt to win back the public's trust and consultant Dave Richardson says bringing Graeme Smith on board as Director of ...
Sport
2 years ago

Crisis-riddled Cricket South Africa (CSA) is headed for a tailspin after the SA Cricketers’ Association (Saca) once again called for the entire board ...
Sport
2 years ago

Cricket in need of reform well down the order

The manner in which Cricket SA's top structure has unravelled over the past week rivals the Hansie Cronje match-fixing scandal and the Gerald Majola ...
Opinion & Analysis
2 years ago