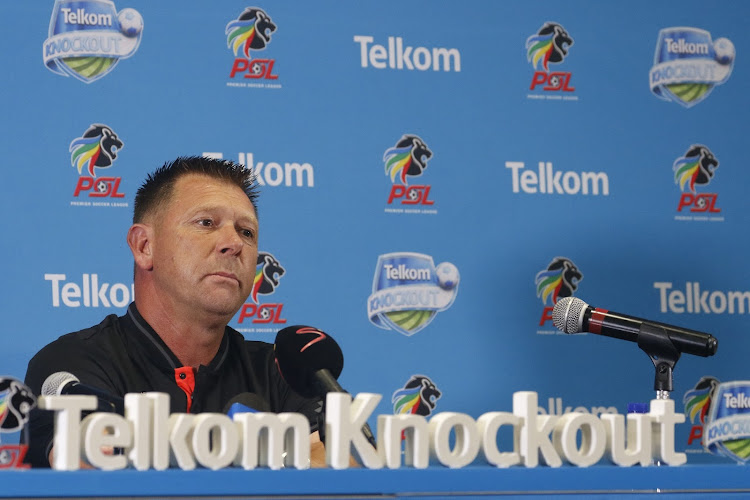 Maritzburg United coach Eric Tinkler is itching for a spectacle free of questionable calls from the match officials when his team takes on the much-fancied Mamelodi Sundowns in the Telkom Knockout final at the Moses Mabhida Stadium in Durban on Saturday.

Often this season certain teams in the Premier Soccer League have either “benefited” or “been robbed” in their matches hence Tinkler’s call for a final that will be free of the controversial officiating calls.

“What you want on Saturday is just a good display across all boards, players and officials,” said the Maritzburg coach, who will be gunning for his third domestic cup victory as a coach.

“But I’m not going to comment more on that [referees]. Whether I get benefits or not. We’ve got to go out and work extremely hard and what goes our way goes our way. What doesn’t go our away, accept it and move on.”

Tinkler said his team has enough quality and experience to not worry much about the perception of being underdogs in Saturday’s final.

“The core of the team that was part of what we experienced [fighting relegation last season], the players that were around from the Nedbank [Cup final in 2018], players like [Bandile] Shandu, Siyanda [Xulu] ...

“Nazeer Allie having won a cup competition and having experienced what we experienced during the [relegation] play-offs — I think that becomes very important rubbing off obviously on the newer players.

“Judas Moseamedi scored a winner for Cape Town City off the bench [in the 2016 TKO final against SuperSport United].

“His experience of winning it and he’s now having a fantastic season and you can see the hunger and desire to take it to another step and try and win this again.

“He’s even motivating other players. And usually Judas is a quiet person, but even he at training is getting everybody revved and fired up to get ready for this game.

“So it’s extremely important to have those experienced players step up because it shouldn’t only come from me.”

Martizburg are chasing their first trophy of the PSL era. Their only previous cup final came in their 1-0 Nedbank defeat against Free State Stars in Cape Town in 2018.

Defender Nazeer Allie is hoping to win his second Telkom Knockout final with Maritzburg United when they face the more fancied Mamelodi Sundowns at ...
Sport
2 years ago

Maritzburg United midfielder Bandile Shandu may be only 24 years old but the player has such a presence that it seems as if he's been around forever.
Sport
2 years ago

Underdogs Maritzburg United have ruled out the possibility of freezing when they face favourites Mamelodi Sundowns in the final of the Telkom ...
Sport
2 years ago