Mosimane after Sundowns win cup in controversial fashion: 'If it was not offside‚ I don’t care' 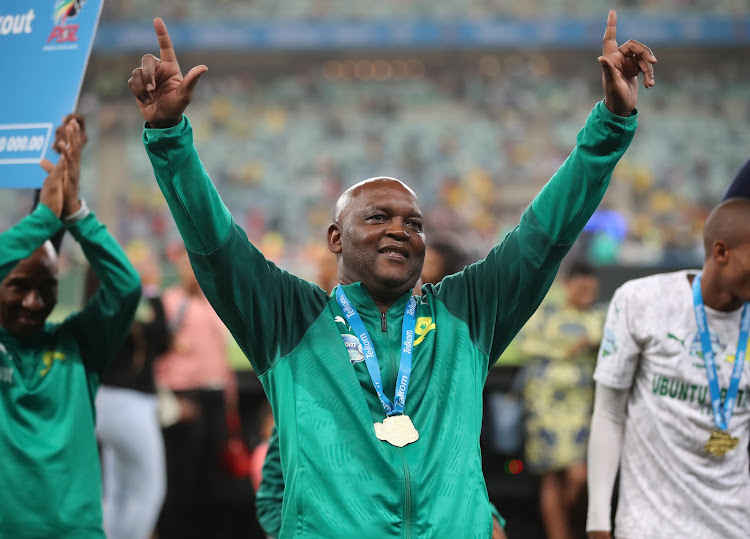 Outspoken Mamelodi Sundowns coach Pitso Mosimane was in his element and had no qualms about the dodgy offside call that helped his club to win the Telkom Knockout final on Saturday night.

The refereeing decision denied Maritzburg United a legitimate-looking equaliser that would have taken the game to extra time‚ but Mosimane was unfazed.

“If we benefited‚ it is about time‚” said Mosimane‚ who has previously claimed his side have repeatedly been on the wrong side of incorrect refereeing decisions.

“In this PSL league‚ people benefit and I’m happy to go three more games (with benefits).”

Linesman Sibusiso Sisilani ruled offside a diving header from Judas Moseamedi deep in stoppage time that would have seen the score tied at 2-2 had it been awarded.

It is impossible to determine from television replays how Sisilani could have been 100 percent certain it was offside and his flag went against the rules which state that when unsure the linesmen must play advantage to the attacking side.

But Mosimane said he was not bothered about winning in such controversial fashion or whether Moseamedi was offside or not.

“If it was not offside‚ I don’t care.

"I’m waiting to benefit also. Some people benefit in a series of five games in a row‚” he added‚ in a veiled reference to Kaizer Chiefs.

Mosimane did pay tribute to Maritzburg’s endeavour‚ saying they had posed many problems‚ but said it was experience that won it in the end for Sundowns.

“It was a difficult game and Maritzburg gave us an early scare.

“Judas pitches up for the big games‚” he said of Moseamedi’s tireless application that led to Maritzburg’s half-time lead.

“But football is 90 minutes.

"To be honest‚ we played well in the first half after the first 10-15 minutes‚ when we settled and we were able to pass the ball.

“We had to be patient. I told the boys at half-time to keep playing our normal game.”

Once Mauricio Affonso scored two goals in the space of 20 minutes to turn the score around‚ Mosimane said he knew the trophy was in the bag.

“We then slowed it down to kill the game‚" he said.

"We have experience from the African Champions League‚ we know how to play the game.”