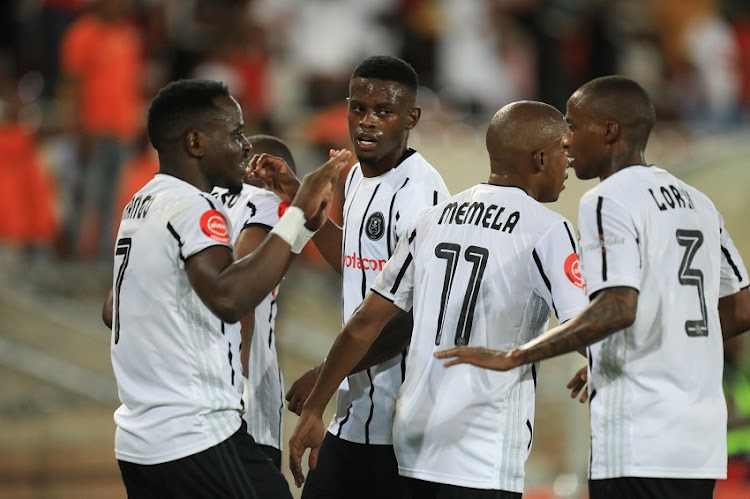 Gabadinho Mhango took his Absa Premiership goal tally to 10 and moved top of the scorers chat when he scored a first half hat-trick to help Orlando Pirates rout Polokwane City 4-1 at the Peter Mokaba Stadium on Tuesday night.

The Malawian born Bucs striker was also on target when Pirates beat Polokwane 3-2 in Orlando in the first round.

The other strike was scored by Bucs midfielder Ben Motshwari after a defensive mistake by Polokwane defence on the stroke of half-time.

Pirates could have gone to half time leading 5-0 had left back Innocent Maela took his chance in the 28th minute when he was left with only Polokwane keeper George Chigova to beat after being put through.

Mhango’s first goals were two beautiful looped shots in the 5th and 14th minute after getting delightful passes from midfielder Luvuyo Memela, who was one of the two changes that were made by Bucs coach Josef Zinnbauer from the team that drew 1-1 away to Bloemfontein Celtic on their first game of the year on Saturday.

Memela and Thembinkosi Lorch came in for Zambian duo of Augustine Mulenga and Justin Shonga, who were dropped to the bench while Mhango was left alone upfront to spearhead the Bucs attack with Vincent Pule, Lorch and Memela closely supporting him.

Bucs right back Abel Mabaso was the supplier of the cross for Mhango’s third goal in the 36th minute before Polokwane wasted a chance to reduce the score-line in the 39th minute when striker Mohammed Anas failed to beat Wayne Sandilands from the penalty spot.

Polokwane won the spot kick when Bucs central defender Ntsikelelo Nyauza handled the ball after he was beaten by Puleng Tlolane inside the area.

Anas was on hand to give the result some sort of respect in the 64th minute, finishing a great move that involved substitute Jabu Maluleke and Salulani Phiri as the home side looked to dominate and change the complexion of the match in the second stanza.

The match was a third for Bucs coach who won his first match 3-1 against Black Leopards, drew with Celtic on Saturday before Tuesday’s comprehensive thrashing of Polokwane on their home turf to move to the fifth spot with 24 points and 11 spoils off the leaders Kaizer Chiefs.