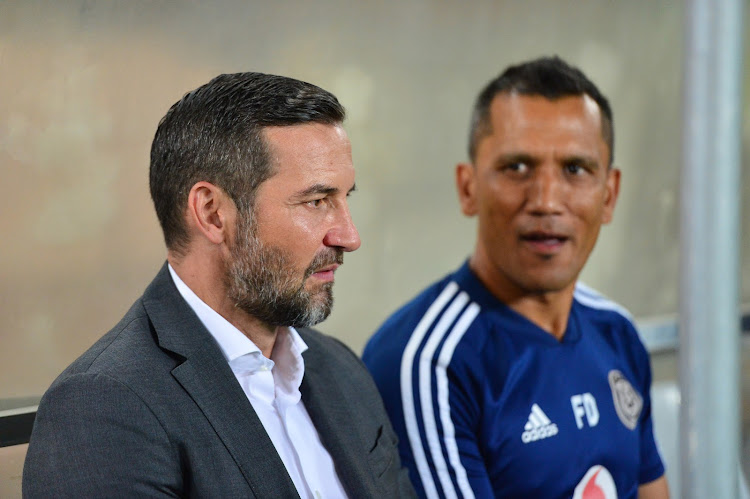 Orlando Pirates coach Josef Zinnbauer has said his players are starting to get to grips with his philosophy after the Bucs dished out a near-perfect first half performance in their rout of strugglers Polokwane City on Wednesday to move into the top five.

City chased shadows in the first half at the Peter Mokaba Stadium in Polokwane as Pirates turned on the style with forward Gabadinho Mhango helping himself to a hat-trick after 36 minutes of swashbuckling attacking football.

It was a barnstorming display from Pirates as they raced to a 3-0 lead with all the goals coming off Mhango’s boot.

Mohamed Anas missed a penalty for City with the score at 3-0 before Ben Motshwari made it 4-0 on the stroke of half time as Pirates moved to 24 points after 16 outings.

“I think the team understands my philosophy.

"We will be better‚” said Zinnbauer after Pirates beat Polokwane 4-1 as Anas made up for his penalty miss with a consolation goal for Clinton Larsen’s charges.

Pirates have looked to suck the life out of their opponents in the first half in the three matches played under the command of the German mentor.

Black Leopards (3-1 win)‚ Bloemfontein Celtic (1-1) and Polokwane 4-1) may have been struggling opponents but Pirates showed marked signs of organization and structure in their play.

They have employed a high-press when the opponents try to build from the back‚ strive to win back the ball as soon as possible after losing it and a fast-paced passing game that looks good on the eye.

“You have seen it in the first half.

"We want to win the ball. We want to have lots of ball possession.

"We need to be on the offensive‚ not on the defensive - that’s my philosophy‚” said Zinnbauer‚ who has amassed seven points from a possible nine since taking over the bench in December.

“It’s not always possible but I am happy with what I saw in the first half. We have a lot of supporters who give us good support and we want fun in the game.”

While Zinnbauer was happy with the three points‚ he bemoaned a second half performance as Polokwane‚ who missed a first half penalty as Anas hit the crossbar with the score at 3-0‚ stormed back with a consolation goal.

It was a third match for Zinnbauer after replacing interim coach Rulani Mokwena and‚ in all the encounters‚ Pirates completely dominated their opponents in the first half only to go off the boil in the second.

“I’m not happy with the goal Polokwane scored against us. But it’s normal.

Pirates have failed to keep a clean sheet under Zinnbauer but he will not be bothered much with two wins and a draw in three matches.

Pirates host champions Mamelodi Sundowns in the Absa Premiership in their next match on Wednesday January 15 at Orlando Stadium in Soweto.

“Sundowns is another opponent who play another system.

"It will be a new game and I hope we improve and prepare the team so good that we can make a point or more (against Sundowns)‚” said Zinnbauer.

Baroka FC and Cape Town City met on the field on Sunday and will be up against each other again on Tuesday‚ but this time in the boardroom when the ...
Sport
2 years ago

One of SA's oldest football clubs, Kaizer Chiefs, will mark its 50th anniversary on Tuesday
Sport
2 years ago