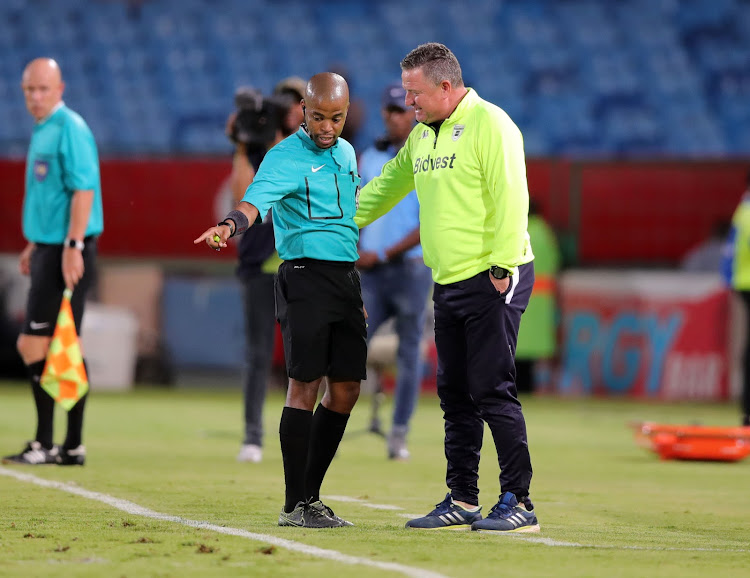 Bidvest Wits coach Gavin Hunt says their participation in the Caf Confederation Cup has taken a heavy toll on his skeleton squad and made it difficult to compete on the domestic and continental fronts.

Hunt admitted that the Clever Boys' resources are stretched as they are three games behind in the Absa Premiership‚ they are in the middle of the group stages of the Confederation Cup and they also have the Nedbank Cup to contend with in the coming weeks.

“It’s a little bit heavy and you can see it with the way we play‚” Hunt said.

“But we are enjoying the ride even though it does take its toll when you are looking for that extra ounce of energy.

"You are also looking for your best team and currently we don’t have it with a lot of players out for a variety of reasons.”

Wits and champions Mamelodi Sundowns‚ who drew 0-0 in the league on Tuesday‚ are the only South African teams participating in Caf competitions and Hunt said they are not as sharp as they should be.

“Both teams are not as sharp as they should be‚ that’s the situation we are in‚" he said.

"The problem with us and our squad is that we run out of players and that’s why we play the kids.

"They (Sundowns) obviously have a much better team on the stands but that is not the same with us."

Wits are now 11 points behind log leaders Kaizer Chiefs but with three games in hand.

But Hunt refused to throw in the towel and said anything is possible in the second round.

“We haven’t turned the corner yet because we have not even played 15 matches in the league yet‚" he said.

"There are so many games still to be played and anything can happen.

"But at the same time we can never write them (Chiefs) off.

"Right now they are in the pound seat and they are doing very well.

"When we reach under 10 games to go‚ things are going to happen my friend.”

Asked to reflect on their draw with Sundowns‚ Hunt said the red card to Buhle Mkhwanazi in the second half made life difficult for them.

“I thought that if it was 11 against 11‚ the game could have gone either way.

"It is obvious that when you get a sending off it changes the game a little bit‚ but we still created chances to score.

"They put pressure on you‚ they are a great team and that’s why some of them play for Bafana Bafana.

"I am disappointed because we went there looking for three points.”

Outspoken Mamelodi Sundowns mentor Pitso Mosimane stared down the barrel of a loaded gun and dared the Premier Soccer League (PSL) to charge him ...
Sport
1 year ago

Baroka FC and Cape Town City met on the field on Sunday and will be up against each other again on Tuesday‚ but this time in the boardroom when the ...
Sport
1 year ago
Next Article