Ajax Cape Town have their GPS set for the promised land 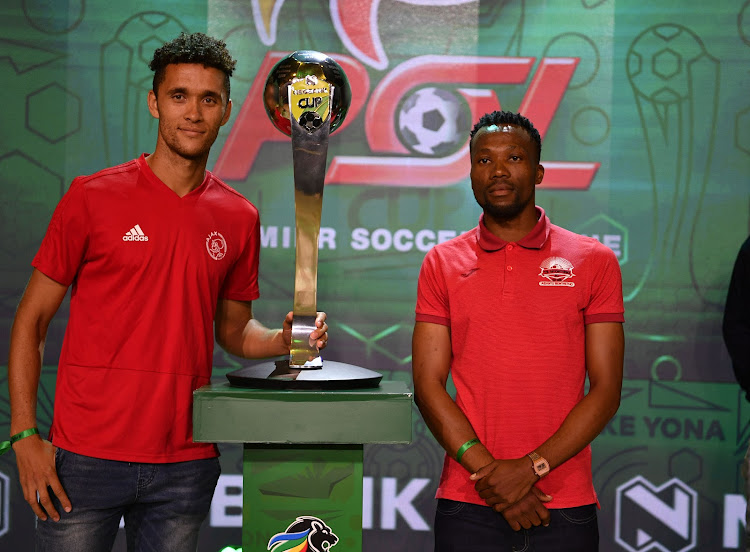 Sedwyn George of Ajax Cape Town and Thabo Moseki of TS Sporting during the 2020 Nedbank Cup launch and round of 32 draw at Nedbank Headquarters on January 09, 2020 in Johannesburg, South Africa.
Image: Lefty Shivambu/Gallo Images

Ajax Cape Town striker Sedwyn George says their sole mandate for this season is to return the Urban Warriors to the promised land of the Premier Soccer League (PSL) next season.

Ajax‚ who were relegated in 2018 after they fielded ineligible Zimbabwean striker Tendai Ndoro and had points deducted‚ are currently top of the GladAfrica Championship with one-point advantage over second-placed Uthongathi FC‚ with a game in hand.

“The main thing for us this season is to promote this team back to the PSL. The first prize is obviously automatic promotion but we will also take going up through the playoffs‚” the lanky attacker said at Thursday night’s Nedbank Cup draw‚ where Ajax were drawn at home with fellow first fivision opponents TS Sporting.

“It will mean the world to us if we can return this club back to the PSL. We owe it to the staff and all the supporters.

“Fans were with us when we were relegated and they are still there supporting the club. Imagine the pride they will have knowing that we are back in the big time – it will also be good for football in Cape Town with the rivalry with Cape Town City.”

When the club was relegated‚ George was an up-and-coming youngster and new to the team but he learned valuable lessons from the chastening experience.

“I was part of the team when we were relegated but I was still a youngster who was new in the team and I did not play too many matches. I know the heartbreak of being relegated – it was very disappointing to go through that early in my career but I have learned a lot from that experience.

“I decided to stay and go down with the team because I love this club and always wanted to play for them.”

Ajax’s quest for promotion continues this weekend when they visit city rivals and third-placed Steenberg United on Saturday at the Cape Town Stadium.

“The key for us at this stage of the season is to only focus on the next game‚ avoid unnecessary losses and try to be unbeaten for the next five to six games. If we can do that‚ there is a high possibility that we can win the league‚” George said.

“Our biggest threat is Uthongathi and I believe that dark horses are third-placed Steenberg because they are unbeaten for the past nine games.

“The last loss they suffered was against us last year and we play them in the next match. which is going to be a grudge match because they will be looking for revenge.

“It is the first time we are top of the log this season after last weekend’s matches with the win over Uthongathi.

“It was a crucial win for us and the next game against Steenberg is going to be even more crucial because we want to continue collecting as many points as we can.”