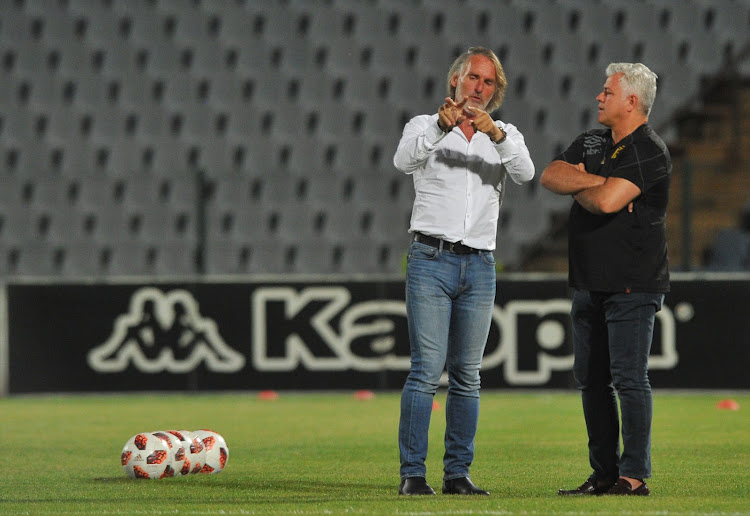 Cape Town City head coach Jan Olde Riekerink speaks with club chairman and owner John Comitis after a match. The Duthcman has struggled to lift City out of a hole.
Image: BackpagePix

Cape Town City are in desperate need of a new striker as they continue to find themselves in unexpected peril near the foot of the Absa Premiership table and they will need to get one fast if new coach Jan Olde Riekerink is to survive.

Top marksman Kermit Erasmus might have netted seven league goals this season but his persistent hamstring problems and inconsistency are hampering the club as the freshly arrived Dutch coach looks to impose a different style on their game.

One win in seven matches since taking over has left Olde Riekerink with decreasing time and matches to bed in his approach as City sit perilously close to the relegation zone.

There has been a radical change to the way they play since the departure of Benni McCarthy.

Olde Riekerink wants City to patiently build up from the back‚ using short passes to advance upfield and through their opponents’ defences‚ dispensing with the frenzied wing play of the past.

It can be laboured at times but it is meant to be played with circumspection‚ keeping possession‚ and rotating the ball‚ frequently looking to use cross field passes to switch the focus of attack.

The pace is vastly different to what the players are used to playing and they are struggling to find their rhythm – midfield dynamo Thabo Nodada in particular.

Against Baroka FC last weekend it seemed to finally be clicking and there was a 30-minute spell in the first half against Kaizer Chiefs on Sunday where they virtually ran rings around the log leaders.

But they also gave away an enormous amount of ball.

Also‚ for all their entries into the Chiefs’ penalty area - arguably the most against the leaders by any club this season – they only had one powder-puff shot on goal in the entire 90 minutes.

And it was dealt with by Chiefs goalkeeper Daniel Akpeyi.

Olde Riekerink says he is convinced that the goals will come but it is hard to see how.

“I trust my team will do it‚” he said without much conviction after the 3-0 loss to Chiefs at FNB Stadium.

“We looked fresh and if we had used our opportunities it would have been a different story.

"We created some amazing opportunities to score but it is about the number of goal you have at the end of the day.

“You don’t get points for the way you play the game‚” was a statement of practicality that Olde Riekerink might need to employ to save himself and the club.

His alternatives are limited: Either the club buys him a striker who can put away the chances they create or he takes a more practical approach‚ ditching the Dutch methodology and going back to the quicker‚ more dynamic play that used to be City’s strength.