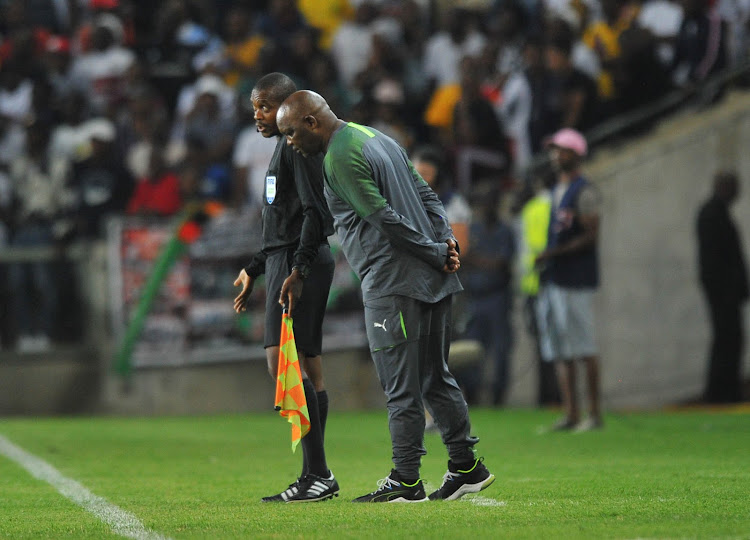 Pitso Mosimane engages to a fourth official during the match against Orlando Pirates at Orlando Stadium on January 15 2020.
Image: BackpagePix

Mamelodi Sundowns are not stressing over a nine-point gap from Kaizer Chiefs in the Absa Premiership‚ or even if they win the league in 2019-20‚ Downs’ coach Pitso Mosimane insisted after his team lost 1-0 to Orlando Pirates on Wednesday night.

Mosimane‚ of course‚ could not stifle his trademark mischievous grin after the game at Orlando Stadium‚ saying everyone should “take a chill pill”‚ and emphasising that Sundowns have won a lot‚ and also have bigger fish to fry in the 2019-20 Caf Champions League.

He compared Sundowns’ situation to that of Manchester City and their coach Pep Guardiola‚ who are 14 points behind Juergen Klopp’s Liverpool in the English Premier League.

“We want to win the league‚ but how do you win the league? When you’ve got difficult games like this‚ a difficult game like Wits [a 1-1 draw]‚” the coach said‚ in an apparent admission‚ or continued attempt at mind games‚ that Downs might be too far behind PSL leaders Chiefs after Wednesday night.

“So has Pep [got a gap]. So maybe I should give him a call‚ just to motivate me. Say‚ ‘Hey Pep‚ you are behind Klopp my friend. What do you do at this point in time?’

“The goal difference [Chiefs have +23‚ Sundowns +9] – it’s OK‚ it’s part of life. We have got nine league titles – we want to win 10. We can leave the four leagues [under Mosimane] and we’re still leading.

“So it’s OK. I mean‚ really guys‚ are we really that hard up‚ to say that‚ ‘Eh‚ we lost the league this year’?

“It’s bragging rights to win 10‚ because we want to put that star [above the badge] that no-one has.

“But I always tell the players‚ ‘We might not have it this year‚ but play for it. And what about next year?’

“Liverpool haven’t won the league for how many years? But this year they are going for it.

“I mean‚ are we doing that bad? In the Champions League we’re top of the group. That’s the big one.

“This one [the league] you can always come and miss‚ and get it. I fought for it with Chiefs for two years and I lost it once – [then] they got tired. Wits came and won once – they got tired.

“Pirates came with Rulani [Mokwena‚ Bucs’ assistant coach‚ and Mosimane’s former No 2] – they lost it twice.

“Chiefs are back. But which team is the common denominator for the last seven years?

“So‚ take a chill pill man‚ I mean really. Take a break‚ hey.

“Club World Cup‚ Champions League‚ 46th in the world – I saw Borussia Dortmund behind us.

“I mean really guys‚ is it that a big deal with this? It’s OK man. It’s one of those.

“And let Bhakaniya come up the log. We need them. As Owen [Da Gama‚ coach of Highlands Park] said‚ we want the Soweto teams to win the league.

“God loves us all. Let Bhakaniya come up. And they played well tonight – you can see the culture is back‚ the winning mentality is back.

“We are OK‚ Sundowns are good. Sundowns have done well to be really worried about this match.”

Second-placed Downs (32 points from 17 games) have another tough outing against third-placed SuperSport United (31 from 18) in the Tshwane derby at Lucas Moripe Stadium on Sunday.