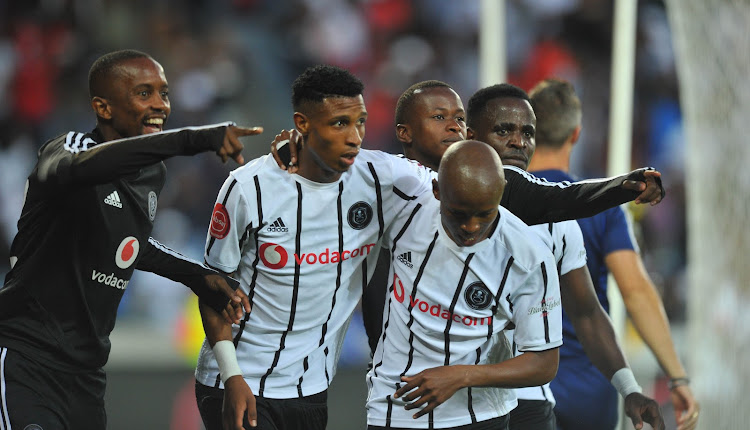 Orlando Pirates are slowly but surely marching on and forcing themselves into Absa Premiership title contention as they continue to notch up win after win.

Pirates’ run may well end up being a huge determining factor as far as where the championship will go, if not to the late bloomers – the Buccaneers themselves.

Vincent Pule’s 52nd minute strike ensured Bucs win their fourth league match in a row as it proved enough to down a stubborn basement club AmaZulu, who would have been happy to escape with a point in Orlando on Saturday.

The victory gave Bucs new coach Josep Zinnbauer his fourth successive victory at home while also stretching his unbeaten run to six matches that only has one draw as a dark mark since his arrival in late December.

Bucs last tested defeat against log leaders Kaizer Chiefs (3-2) in November and they’ve now gone eight match without a defeat, pushing themselves to be among the title contenders, albeit late after having an indifferent form in the league before the German born coach replaced caretaker coach Rulani Mokwena a few days before the end of last year.

Pule’s all-important striker, which came from Thembinkosi Lorch’s wonderful cross on the right, moved Bucs from fifth to fourth spot where Zinnbauer’s team now has a chance to force a photo-finish to the league race that involves Chiefs, defending champions Mamelodi Sundowns and SuperSport United.

Against an Usuthu side that was desperate to record their first victory this year to move off the bottom after collecting only one point from their previous four outings, Pirates started on a front foot pressing high up for an early goal.

It was AmaZulu, however, who looked dangerous with their counter attacks that were pointed to their leading scorer Bonginkosi Ntuli, who forced Pirates skipper Happy Jele to foul him near the danger area as early as the seventh minute.

Pirates should have taken the lead though in the 18th minute when Lorch put Pule free with a defence splitting pass. The Pirates winger failed to beat Siyabonga Mbatha in Usuthu goals as the keeper did well to block the shot to safety. Pule was to redeem himself in the early stages of the second stanza, tapping home Lorch’s cross on the near post after catching Usuthu defence in slumber land.

AmaZulu always looked shy of penetrating the Bucs defence as they only posted Ntuli as a lone man up front, hoping to support him after feeding him with long balls. The plan didn’t work as Bucs starved the Durban side of possession as Lorch, Luvuyo Memela, Fortune Makaringe, Ben Motshwari and Pule dictated the terms in the midfield area.

And had it not been the brilliant goalkeeping of Mbatha, an avalanche of goals could have been conceded by Usuthu whose coach Josep Vukusic may well be in his last days on their bench after gaining only one point from their last five matches.