"Let’s be clear. It was not a fantastic meal. I believe some ingredients were missing. No doubt about that” 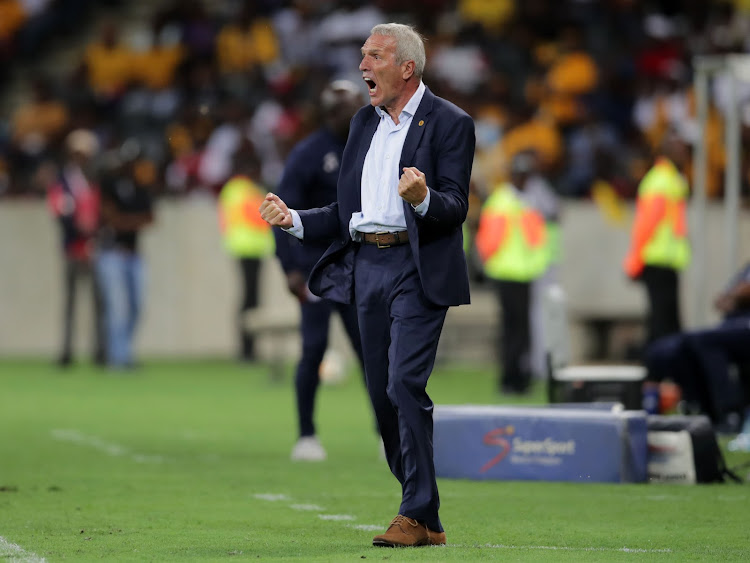 Ernst Middendorp will not mind at all how his Kaizer Chiefs play for as long as they keep winning maximum points.
Image: Samuel Shivambu/BackpagePix

Ernst Middendorp has described the football dished out by his table-topping Kaizer Chiefs in their last-gasp 1-0 victory over Lamontville Golden Arrows as a meal that was not fantastic.

Chiefs scrapped through to a win via the solitary strike of Lebogang Manyama but the German mentor was far from pleased with the gourmet served at Moses Mabhida Stadium on Saturday.

“Ja. It is part of the game that it was definitely not a delicacy. Let’s be clear. It was not a fantastic meal. I believe some ingredients were missing. No doubt about that.”

Middendorp said he knew a certain concept from Golden Arrows would come into Chiefs’ direction.

“They made it very difficult for us to come through. Most of the doors were closed. But in preparing the team I was very clear about it that one ingredient, crucial ingredient at the end of the final success would be to be patient,” said Middendorp.

“We have an idea to go a certain way. It is always an opponent having a certain idea knowing what we are doing where we are strong, knowing our ambition and skills.

"And then of course you have always a set parameter. During the week we worked on our spacing and our movement off the ball was so important.

“But to have an open game and a very clear up and down you need two partners. You need two teams going at each other.

"In the end we won the three points. We have done it. We should be busy with ourselves and what we can influence. That’s it.

The victory saw the runaway log leaders stretch their points tally to 45, 10 ahead of Mamelodi Sundowns who didn’t participate in Premier Soccer League action owing to their Confederation of African Football Champions League commitments.

Middendorp was adamant that patience was key to Chiefs attaining victory and he argued that Amakhosi were more active than Abafana Bes’thende.

“I said it already before the game that the idea would be not to panic, not getting out of the structure that would be the chance to make it here today.

"Good, it happened in the final minute. It is always the result of 98 minutes work. Good.

“I think we were definitely more active and wanted it more than the opponent. In the end good, we take the three points.

"We wanted the three points. I’m okay with it. I ask for patience. I ask for calmness. I ask for confidence. I ask for really being cool from the beginning to the end knowing that it would be a very structured opponent who will be difficult to break down.

“Sometimes you have to wait a little bit. It is the characteristics of champions winning such matches.

"If I’m not mistaken, one or two years ago a team that won the league had 12 times 1-0 [victories]. This is something for everybody who is in a specific special competitive mood.

“Standing there with the number of points where we are sitting at the moment, there is always something special.

"How teams are acting or we are acting if it comes to playing against top teams in the league.”

Motjeka Madisha scored a last-minute equaliser as Mamelodi Sundowns survived a refereeing howler to draw 2-2 at Angolan side Petro Atletico in their ...
Sport
2 years ago

Pitso Mosimane bemoaned a slow and sluggish Mamelodi Sundowns performance in their 2-2 away Caf Champions League draw at Angolan side Petro Atletico ...
Sport
2 years ago

Orlando Pirates are slowly but surely marching on and forcing themselves into Absa Premiership title contention as they continue to notch up win ...
Sport
2 years ago