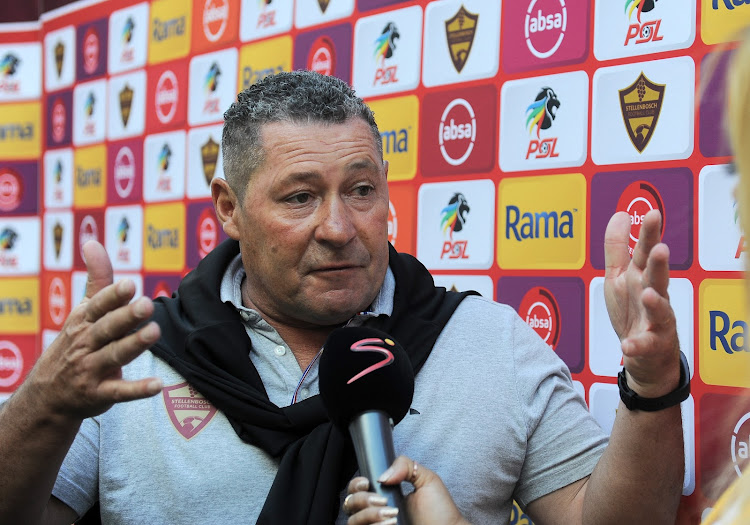 Steve Barker is convinced his team belong at this level of the game after masterminding three wins in succession for Stellenbosch FC.
Image: Ryan Wilkisky/BackpagePix

Coach Steve Barker says he has never felt threatened in his job as newly-promoted Stellenbosch FC recorded a third win in a row at the weekend to move from the relegation scrap and into the top eight of the Absa Premiership.

Stellenbosch beat struggling Polokwane City on Saturday thanks to a lone goal from new signing Ovidy Karuru to shoot into the top half of the table.

Barker admits the first half of the season had been a learning curve‚ and adds that the club’s quicker-than-expected promotion to the top-flight had presented a challenge.

“People forget that we achieved what we wanted to do in five years‚ in only three years‚” Barker says.

“But we have got management that see the bigger picture and understand what we are trying to create.

“And I do believe we are creating something special from the bottom up. There has never been any talk of me getting the axe‚ there is belief in what we are doing.”

He says after a tough run of fixtures‚ a surprise 4-1 success at Highlands Park has proved the catalyst for their improved fortunes.

“We had a fixture list in December and the early part of January where we played SuperSport United‚ Mamelodi Sundowns and BidVest Wits.

“The turning point was when we were down near the bottom table‚ feeling really flat‚ but went away to Highlands Park and got a 4-1 victory that gave us the belief that we can do it and that we belong in this league.

“To subsequently get two more wins in a row … before that we could have been in the bottom two‚ now we are in the top eight.

“It just shows that the league can change drastically‚ if you don’t get points in next two or three games‚ you are back near the bottom.”

Stellenbosch also grind out a 1-0 win over Baroka FC in their current run and while the football has not always been pretty‚ Barker says there has been no lack of effort from the players.

“It’s the second week in a row the team has shown that character. We want to be a team that is hard to beat and we want that if a team beats us‚ they will have to play well.

"So that character and resilience makes me really proud of the effort the players are making.”

The addition of Zimbabwe international Karuru and veteran midfielder Granwald Scott in January have also added some midfield steel and creativity.

“I was very happy for him (Karuru) to score‚ both him and Granwald have given us that little bit of experience.

"I had a feeling he would get on the scoresheet‚ I told him that at lunch before the game!

"He works hard off the ball and gives us a little bit of creativity.”

Stellenbosch are next in action away at another struggling side‚ Black Leopards‚ on Sunday.

This was truly an ugly advert of the beautiful game, an error-ridden affair that would have been shamed by a spectacle of pot-bellied souls in a ...
Sport
1 year ago

Bradley Ralani is clear about what kind of football player he is - an attacking winger with mesmerising skills.
Sport
1 year ago

Motjeka Madisha scored a last-minute equaliser as Mamelodi Sundowns survived a refereeing howler to draw 2-2 at Angolan side Petro Atletico in their ...
Sport
1 year ago