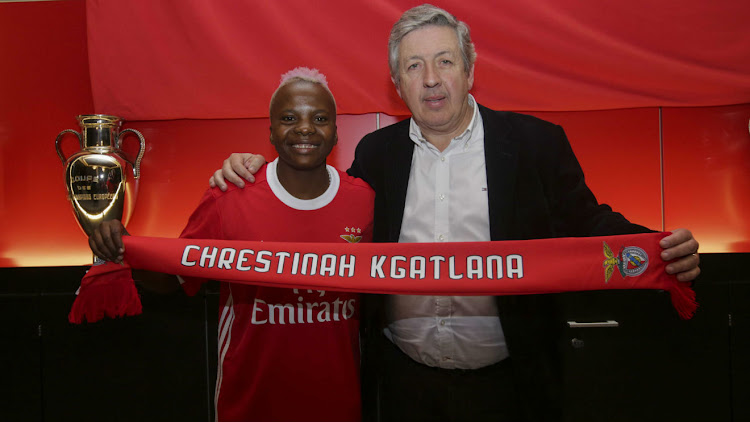 Thembi Kgatlana’s move to top Portuguese club Benfica is the latest in a number of high-profile signings for Banyana Banyana players as the country continues to reap the benefit of their FIFA Women’s World Cup appearance last year.

South Africa’s place in the finals shone the spotlight on the country’s women’s football and a number of players have gone on to benefit as interest in South African players is at an all-time high.

"I am very excited to sign with Benfica, thank-you to the team, the president and everybody involved, for giving me the opportunity to come to Portugal,” Kgatlana told her new club’s website.

"Benfica is a great club in Portugal and the world. I saw their records, for me to be able to get into such a big club is an honour to me and my career.

"We are currently number one in the league and they [the supporters] must continue supporting the girls because hopefully at the end of the season we can lift the trophy."

"We have very high expectations in relation to Thembi,” he said.

“She was considered the best African Player of the Year in 2019, she is a player with very strong characteristics, she is very fast, she can do one or two positions on the field, she can play nine and be extreme.

“This acquisition we will endow Benfica's attack with several solutions to add to the ones we already have.”

Benfica have been the dominant force in Portuguese women’s football since they were formed in 2017, winning 47 of their 49 matches played, with a draw and just a single loss.

They have scored 94 league goals in their 13 matches this season and conceded only one.

But the pacey Kgatlana has not been the only Banyana star on the move in recent times.

Just last week striker Kelso Peskin joined French second-tier side Toulouse and was already in action on the weekend.

Peskin has previously been playing college soccer in the United States for the last few years.

And then there is Linda Motlhalo, who has moved to Swedish side Djurgardens, where compatriot Stephanie Malherbe played last season before injury cut her campaign short.

Motlhalo’s silky skills should be well-suited to the Swedish league.

Refiloe Jane has been starring this season for AC Milan and is a fixture in their side in Italy, while defender Regina Mogolola is also at Serbian side Red Star Belgrade.

Letago Madiba, who has nine goals in nine starts, and Rachel Sebati are at Turkish outfit ALG Spor.

Andisiwe Mgcoyi has a stunning 17 goals in eight games for Apolonia in the Albanian league, where she is joined by Zanele Nhlapo.

Leandra Smeda was also at Vittsjö in Sweden last year, but has not had her contract renewed.

Basement dwellers AmaZulu have not won a game in 2020 but coach Josef Vukusic is confident that his job is not on the line.
Sport
2 years ago

Ernst Middendorp has described the football dished out by his table-topping Kaizer Chiefs in their last-gasp 1-0 victory over Lamontville Golden ...
Sport
2 years ago

Four people were arrested over the weekend for allegedly selling fraudulent tickets to the Absa Premiership game between Golden Arrows and Kaizer ...
News
2 years ago