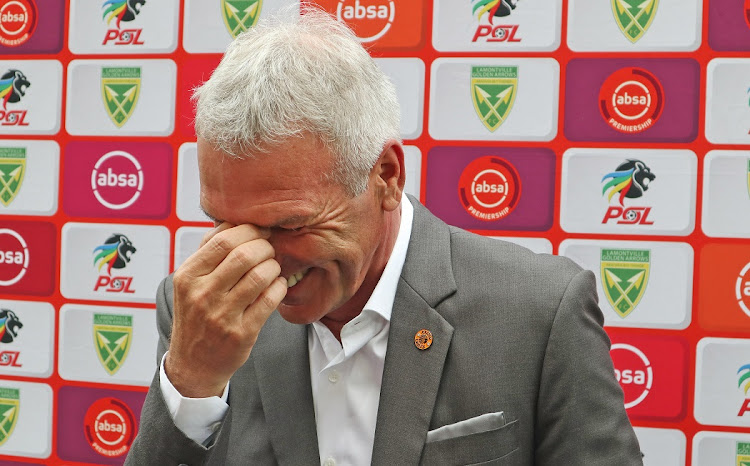 Kaizer Chiefs coach Ernst Middendorp said the team has scored goals from set-pieces, and 'there’s nothing wrong with it if we have this strong side'.
Image: Anesh Debiky/Gallo Images

Kaizer Chiefs coach Ernst Middendorp has scoffed at the notion that his team are over-reliant on set pieces.

Chiefs have seen their Absa Premiership lead cut to four points in the past week. On Saturday they turn their attention to the Nedbank Cup, meeting Highlands Park in the last-16 at Makhulong Stadium.

The primary reason for the reduction from a nine-point lead was Chiefs’ 2-1 defeat against Maritzburg United at FNB Stadium on Saturday.

Defending champions Mamelodi Sundowns brought Amakhosi back within striking distance with a 2-1 home win against Bloemfontein Celtic on Wednesday night.

Against Maritzburg, Chiefs’ over-reliance on set-pieces had appeared to come to the fore.

They created chances in open play, but did not look comfortable attempting to finish them. United  were able to keep Amakhosi at bay despite the Soweto giants creating multiple set-pieces for Lebogang Manyama to swing into the danger area.

“I don’t think those eight saves from [Maritzburg keeper Richard] Ofori all came from set-pieces. Not at all,” Middendorp scoffed, asked about an apparent over-reliance.

“We have a goal difference of +23. What are you telling me now?

“We have scored goals from set-pieces, from the normal run of the game. And there’s nothing wrong with it if we have this strong side.

“I am smiling sometimes during the night when I’m busy thinking, because last season people were saying, ‘You have so many set play, and you’re not making anything out of it’.

“Now we are putting a lot of work into it every day, every week.”

Chiefs face two potentially big matches in their effort to reverse their past four seasons without silverware.

Highlands are notoriously tough to beat at their compact Makhulong fortress. Owen Da Gama’s team are out for revenge against Chiefs after they lost 3-2 in the league’s season opener in Tembisa in August, then 3-0 in the January return match at FNB.

If Amakhosi want to send out a message that the cracks are not showing for a squad under pressure, and win the league in their 50th anniversary season, a big cup win at Highlands would go a long way to achieving that.

Junior Khanye has said that this season’s long-time Absa Premiership leaders Kaizer Chiefs will not win the league title this season, and tipped ...
Sport
1 year ago

Things are not falling apart‚ Kaizer Chiefs centreback Daniel Cardoso has said after Amakhosi suffered a blow to their title hopes with their 2-1 ...
Sport
1 year ago

Kaizer Chiefs coach Ernst Middendorp has come out in full support of Daniel Akpeyi, suggesting the Nigeria international will retain the Amakhosi ...
Sport
1 year ago