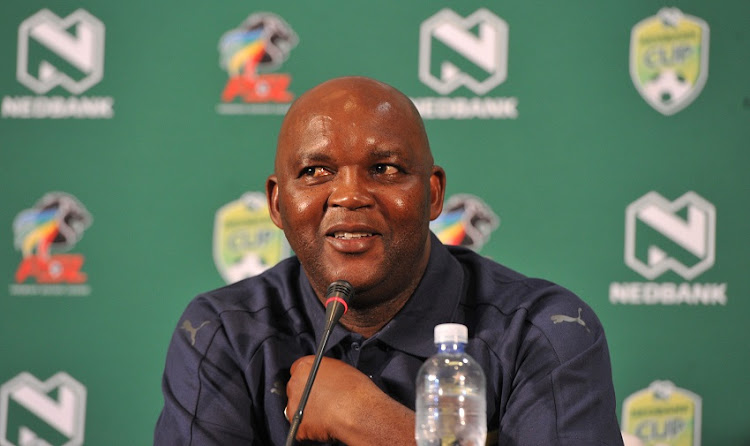 Mamelodi Sundowns coach Pitso Mosimane says VUT have good players and he went to watch them so his team are prepared. File photo
Image: Sydney Mahlangu/BackpagePix

Mamelodi Sundowns coach Pitso Mosimane has explained why he travelled personally to watch a SAB league match played by his side’s Nedbank Cup opponents, Vaal University of Technology (VUT), on Sunday rather than sending scouts.

Mosimane said he wants to treat VUT, who shocked Lamontville Golden Arrows on penalties in the last-32, with maximum respect. He was also wary of scouts coming back and saying that the fourth-tier amateurs were just not in the class of 2016 Caf Champions League winners Sundowns.

Mosimane travelled to Vereeniging to watch VUT in their away match against a team called Try Me Again FC.

“I said: ‘I want to see what’s happening’. I didn’t want scouts because a scout would tell me, ‘Coach, they’re not at your level’,” Mosimane said.

“In stature they are not at our level. But football is football. The minute you take it like that you are disrespecting your opponents.

“And I went to see. I could see, what a good team. I was not surprised.

“Well organised. Good centrebacks who know how to play from the back. They don’t just kick the ball. They’ve got a very good striker, and a very good central midfielder, and their two wingers are smart.

“Also they’ve got a big boy playing behind the strikers. What a good team. And they clobbered the other team with ease.

“My analyst will tell you they were playing a team called Try me Again at a field of Hoerskool Smuts.

“I said: ‘Guys, what’s happening here? What are we in for here?’

“So I went. Their supporters were mocking me, taking videos and all that. It’s normal. I’m from that humble background. I’m a township boy. So it’s no problem.

“I went with no security, with my scouts. But the guys were okay. They were just having fun out of me.

“I saw what VUT do. Very aggressive, attacking team. I briefed my team about it.

“I brought in a team, Orbit College from the ABC Motsepe League [third tier], to play a friendly against us. And they were nearly the same as VUT.

“So that we know what to do. So it shows we respect VUT, because we are prepared for them.”

Sundowns go from meeting an amateur team to continental giants as they face Al Ahly in the first leg of their 2019-20220 Champions League quarterfinal at Cairo’s Al Salam Stadium on February 29.

Shots fired - ‘We will see who has quality,’ VUT coach warns Sundowns

Mamelodi Sundowns might be recent African champions, but that has not stopped Vaal University of Technology (VUT) coach Stanley Nkoane spitting fire ...
Sport
1 year ago