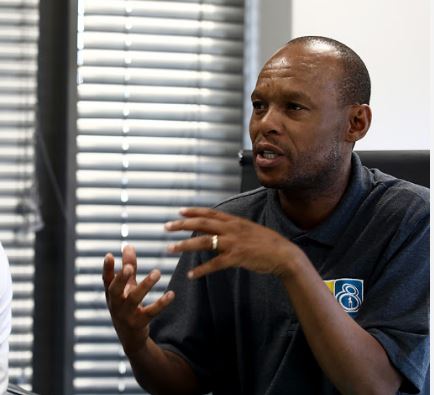 Jabu Mahlangu, who has played for both Kaizer Chiefs and Orlando Pirates, has tipped the latter to win the Soweto derby.
Image: Masi Losi

Jabu Mahlangu has put his head on the block and says Orlando Pirates will beat traditional rivals Kaizer Chiefs when the two sides meet in a highly anticipated Soweto derby at a sold out FNB Stadium on Saturday afternoon.

Mahlangu turned out for both clubs during his playing days but the midfielder leaned towards Pirates and said the Bucs would have enough ammunition to see off premiership leaders Chiefs in the mouthwatering encounter.

“Orlando Pirates are on form‚ they are playing a good brand of football‚ mixing modern football with a bit of kasi flavor.

“They are scoring goals and their defence is much better under the new coach.”

The former dribbling wizard said Chiefs have a slight advantage when it comes to set-pieces but he maintained that this would not be enough for AmaKhosi to beat Pirates.

“Kaizer Chiefs are very dangerous with set-pieces and diagonal passes to strikers Nurkovic [Samir] and Castro [Leonardo]‚ but for them to beat Pirates they need a plan B because if Pirates stop the supply of those diagonal passes‚ they will struggle‚” he said.

The former Bafana Bafana international said he was not impressed by Chiefs’ style of play under coach Ernst Middendorp.

He echoed Chiefs legend Absalom "Scara" Thindwa who said even though Chiefs are winning‚ he was not impressed by the style of play under the German.

“I don’t like their style of play‚” said Mahlangu.

Mahlangu was also quick to caution that current form would not really come into play in the derby.

“Pirates have an advantage in terms of confidence going into this game because of the six consecutive league wins they have had‚” he said.

“But a derby is a different game on the day.

"The team that will minimise their mistakes will always have a chance to win the game.”

WATCH | Chaos as speeding car drives onto pitch during soccer match: 'We almost lost our lives'

Soccer fans around the country are still stunned after an unidentified man drove his car onto the pitch and allegedly tried to run over the referees ...
Sport
2 years ago

'Scara' Thindwa on Kaizer Chiefs: 'I'll be honest with you‚ I don’t like the way they play'

Absalom “Scara” Thindwa says he hopes Kaizer Chiefs will return to beautiful football if they can win the league in 2019-20.
Sport
2 years ago