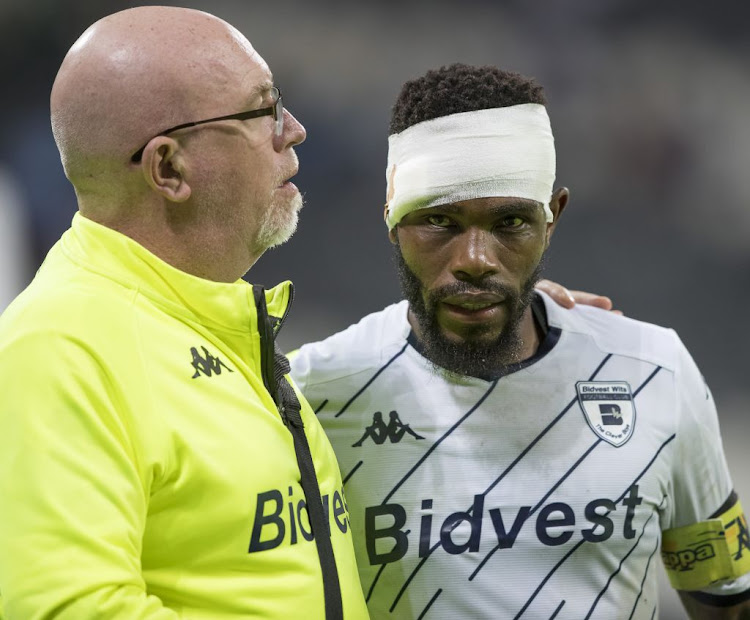 Bafana Bafana skipper Thulani Hlatshwayo has been confined to a dark room as he deals with headaches from the concussion he suffered at the weekend.

It is likely to sideline the 30-year-old Bidvest Wits centre-back from his club’s next match against Chippa United on Saturday, and could see him left out of the two Africa Cup of Nations qualifiers against Sao Tome e Principe at the end of the month.

Hlatshwayo had stitches put into a cut he suffered when he banged his head against that of SuperSport United substitute and ex-teammate, Siyabonga Nhlapo, as they went up for a ball at a corner.

Nhlapo also suffered a cut but was able to continue. Hlatshwayo, however, had to leave the pitch for the last 10 minutes of the game between the two sides at the Mbombela Stadium in Nelspruit on Saturday.

As Wits had already made three changes by that time, they were forced to finish the match down to 10 men.

Hlatshwayo is risking his future wellbeing as the cumulative toll of concussions could affect him in later life.

Cranial trauma has become a major issue in American Football, where head clashes are frequent and ex-players suffer a variety of ailments, and as a result, later on in life.

In Britain, the effects of heading the ball are being blamed by studies for the unusually high number of ex-players who suffered from early dementia. Scottish children have been banned from heading the ball in training.

A lack of concussion protocols in football means Hlatshwayo will be allowed to carry on playing while being at serious risk.

His last serious incident came just before Christmas in 2018 when he was kicked in the head by Tebogo Sodi of Baroka FC near the end of a premiership game, and received six stitches to a gash just below his eye and along his cheek bone.

The centre-back was carried off the field completely knocked out by the blow.

Hlatshwayo also suffered concussion after a clash of heads in the 2015 African Nations Cup finals in Equatorial Guinea, and again in early 2018 when he missed four premiership  games.

Bafana Bafana captain Thulani Hlatshwayo was laid out cold again at the weekend in what is his third serious concussion playing top level football ...
Sport
3 years ago

A frustrated Gavin Hunt took the unusual step of publicly criticising Sifiso Hlanti for mistakes that proved costly in the weekend defeat by ...
Sport
1 year ago

SuperSport United remain mathematically in the league title race and if they win their remaining seven games will finish on 59 points, the same ...
Sport
1 year ago