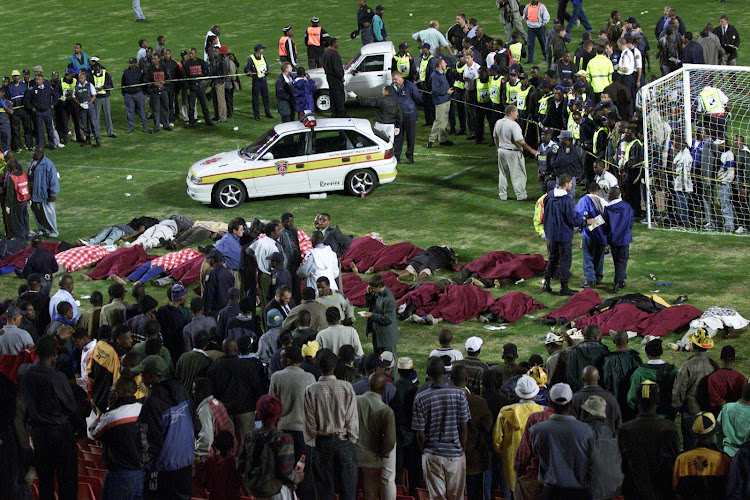 The Ellis Park Soccer disaster in which around 42 people died after having been crushed in a stampede as fans tried to enter the crowded stadium to watch traditional rivals Kaizer Chiefs and Orlando Pirates.
Image: Joe Sefale. © Sunday Times

Former Kaizer Chiefs striker Siyabonga Nomvete has remembered the events of April 11‚ 2001‚ and the Ellis Park disaster that claimed 43 lives that fateful night.

The Premier League match-up on a Wednesday night between Chiefs‚ who had won on the weekend to make themselves title challengers again‚ and leaders Pirates‚ had generated huge interest.

With people leaving their work late there was a rush for the stadium for the 8pm kickoff game‚ and far more than the 62‚000 capacity arrived.

As early goals were scored for Chiefs and then Pirates‚ scores of people outside the stadium surged to enter‚ resulting in crushes and a stampede and 43 supporters dead.

Nomvete‚ playing for Chiefs in the match that was abandoned when the officials became aware of the situation‚ told Kaizerchiefs.com: “It is a heartbreaking memory. It is one disaster that I will never forget.

“No one would have expected something like that to happen. I still can’t believe this happened in our lifetime. It is terrifying to remember that night.

Nigerian striker Tony Illodigwe had put Chiefs ahead in the 15th minute. Benedict Vilakazi equalised two minutes later. An estimated 80‚000 people had turned out for the match and as the two goals came in quick succession a push came from the supporters still outside Ellis Park to get in.

“I could hear the turmoil from the stands after Pirates equalised. That is when I could notice that something unusual was happening from the stands.” Nomvete said.

“There was more than usual noise from the crowd. It was the first time I saw the supporters jumping over the stands in attempt to watch us from the touchline.”

The game was stopped around the 34th minute by then then-PSL CEO Robin Petersen.

“That’s when we also realised that there was a problem‚” Nomvete said. “We realised the seriousness of the case when we were informed in the dressing room that a stampede happened‚ and people died in the process.

“To date I can still see agony in the eyes of everyone in the dressing room. That was when the message was delivered that a regrettable situation had occurred in the stadium.

“I had never seen so many people in and around the stadium – it was packed. We couldn’t drive out of the stadium. It was a mission to leave the stadium‚ and that is when we started understanding that the situation was really bad.

“The days that followed were not life as usual. Going back to training was tough. But before that‚ I remember we joined the football fraternity to respect and give our support to the bereaved families.

“We visited and paid homage to the bereaved homes. I was still young‚ scared and horrified. As youngsters‚ we relied on senior players like Doctor Khumalo for consolation.

“But it took a while for us to come to terms with what happened. I can say that this is one date that I will never forget.

“It is one hard lesson. This disaster ensured that the security be intensified at the games. I wish the supporters will look back at this disaster and cooperate with these safety measures.

“My respects go to the families that lost their loved ones. I wish to convey a message of love and peace to them and for the departed souls to rest in eternity.”