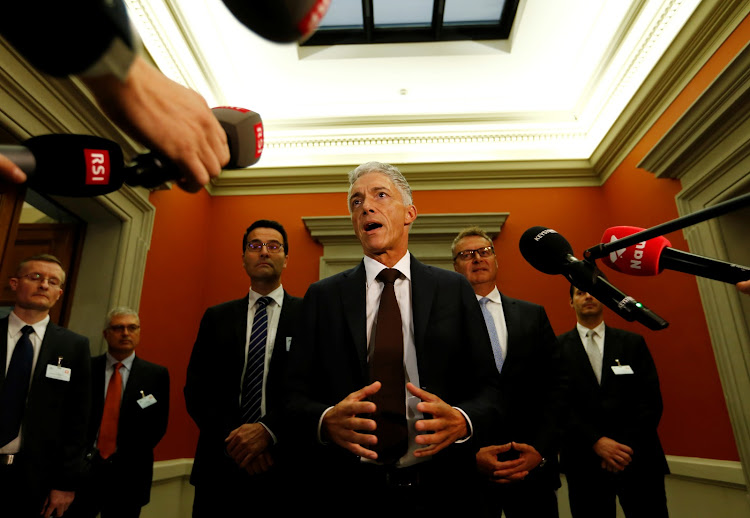 Swiss Attorney General Michael Lauber gives a statement after his re-election in the Swiss Federal Assembly in Bern, Switzerland, September 25, 2019. Lauber now faces calls to resign over the collapse of the case, which critics contend he handled inappropriately.
Image: REUTERS/Denis Balibouse

World soccer body Fifa said the expiry without a verdict of a fraud trial in Switzerland over a payment linked to the 2006 World Cup was worrying for the sport and the Swiss justice system.

They were accused of misleading the DFB about a $10.3m payment.

The transfer of the funds triggered several investigations and Niersbach resigned as DFB president over allegations it was slush money to buy votes for Germany's bid for the tournament, which it ended up hosting.

The four have denied wrongdoing.

Swiss Attorney General Michael Lauber faces calls to resign over the collapse of the case, which critics contend he handled inappropriately.

"The fact that the case has now ended without a result of any kind is very worrying, not only for football but also for the administration of justice in Switzerland," Fifa said in a statement late on Tuesday.

It said it hoped the truth about the payment would eventually emerge, "and that those having committed wrongful acts will be duly sanctioned, if not in Switzerland, then maybe somewhere else."

But the attorney general's investigation has long been beset by problems, including when Lauber was barred from participating in investigations of corruption in soccer.

Swiss broadcaster SRF reported on Tuesday that a member of parliament's court commission is drawing up a request to seek Lauber's removal, a formal process that would take weeks.

Lauber's office said it was not aware of any formal effort to oust him.

"As has been the case, the attorney general stands ready to answer questions from the responsible committees," it said in a statement.

Fifa added that, as far as it was concerned, "this case is certainly not over, as we cannot and will not accept that a 10 million franc payment is made from Fifa accounts without a proper reason".