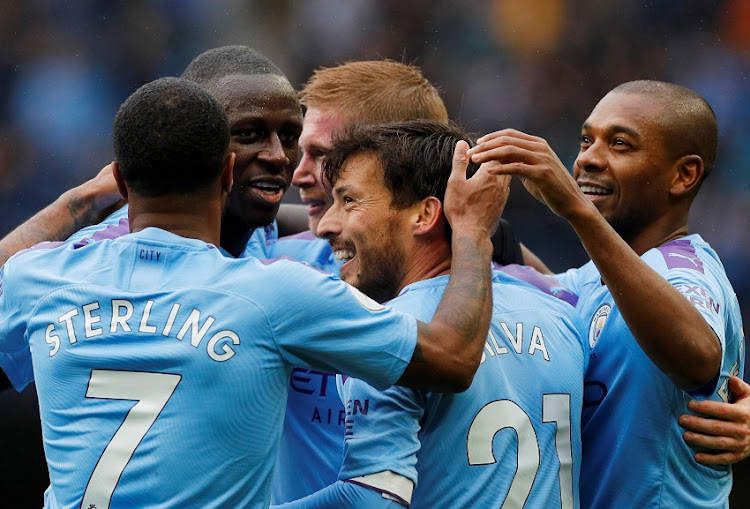 Manchester City's Raheem Sterling is reportedly among of a list of English Premier Legue players who are against the rushed return to group training and playing.
Image: REUTERS

The Premier League hopes "Project Restart" will move a step closer to becoming reality on Monday when clubs hold an emergency meeting to vote on a return to group training amid the coronavirus pandemic.

Should at least 14 of the 20 clubs agree that safety protocols are sufficient, players are likely to return to a limited first phase of group training on Tuesday.

Sunday should have been the final day of the Premier League season but the coronavirus outbreak meant the league was suspended in March with 92 fixtures remaining.

The Government last week opened the door for the return of elite sport, but several hurdles remain before the Premier League can resume behind closed doors.

Clubs will have been encouraged, however, by the return of the Bundesliga this weekend -- the first major soccer league in the world to resume after the lockdown.

Clubs need to agree the conditions for players to return to training under strict rules.

Safety measures will include tents where temperature checks will be conducted, strict hygiene criteria, no canteens and no showers.

A maximum of five players will be allowed per pitch with tackling forbidden.

Players will be tested twice per week and are being asked to provide written approval that they have received and understood the club's Covid-19 policy.

Dortmund explode into action as Bundesliga restarts with no fans

Borussia Dortmund provided much-needed fireworks with a 4-0 demolition of bitter rivals Schalke 04 on Saturday after the German league restarted in ...
Sport
1 year ago

The prospect of clubs playing their remaining matches at neutral venues has receded with more than half speaking out against such a proposal.

"Project Restart" was originally looking at a June 12 resumption date but should the clubs agree and, if there is no rise in infections in the country, a return date of June 19 or June 26 appears the most likely.

With Britain's virus death toll still rising by hundreds each day -- the latest figure is 34,466 -- the return of the Premier League has divided opinion.

Although the majority of players are said to be supportive, there have been dissenting voices, including Manchester City's Raheem Sterling, Tottenham Hotspur's Danny Rose and Watford's Troy Deeney.

Chelsea's Brazilian midfielder Willian said: "Honestly, from what I can see, a lot of players -- the majority, I'd say -- are uncomfortable with the idea of returning right now.

Borussia Moenchengladbach boosted their hopes of winning a first Bundesliga title since 1977 after early goals from Alassane Plea and Marcus Thuram ...
Sport
1 year ago

"We're really keen to return, we really miss playing and doing what we love. But it needs to be safe for us to do so."

Newcastle United manager Steve Bruce said that while clubs are likely to agree to the first phase of group training to begin this week, June 12 was too early to start matches.

"We need enough preparation time to get these players into shape or they are just going to fall down like a pack of cards.

"Most of the managers have the same concerns," Bruce told the Sunday Telegraph.

"We would need at least six weeks."

South Africans will have to wait a little longer before they are able to watch live football as pay channel SuperSport does not have the rights to ...
Sport
1 year ago

Uefa has a plan to finish the 2019-20 season by August, including the Champions League and Europa League campaigns, the European soccer governing ...
Sport
1 year ago

Former Baroka FC coach Kgoloko Thobejane says the league title should be awarded to long-time Premiership leaders Kaizer Chiefs if all options of ...
Sport
1 year ago