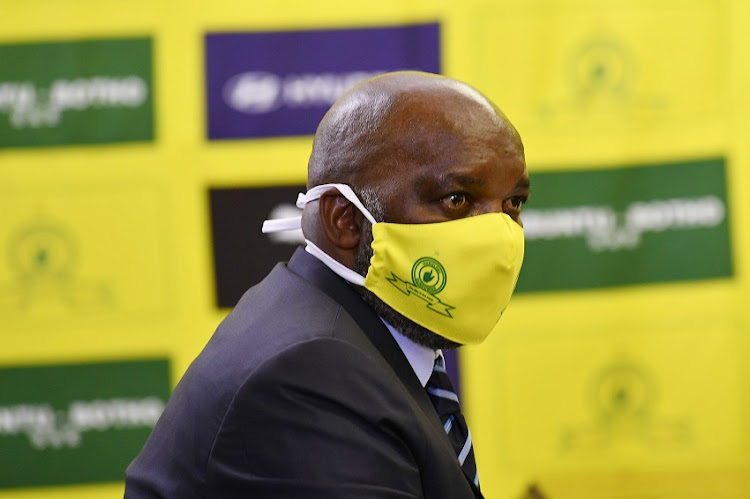 Forthright Mamelodi Sundowns coach Pitso Mosimane has expressed reservations about a proposed plan to accommodate all the topflight and lower tier clubs in a massive camp as a precursor to the restart of the season.

TimesLIVE reported this week that the Premier Soccer League (PSL) is to propose a plan to the government that could see all 32 clubs - the 16 Absa Premiership and the 16 GladAfrica Championship - accommodated in a massive camp in a bid to complete the season that was interrupted by the Covid-19 outbreak in March.

The plan will be proposed to government and the matches could be played in July if it is given the green light.

But Mosimane‚ who has never been one to mince his words‚ questioned the practicality of housing 32 teams in one major base camp.

“We will all want the best accommodation. You can do it but you must look at it carefully and say is it easy to do it.

"In terms of controlling people‚ you can do it at Sun City but in terms of accommodation how are you going to say Chiefs is staying at Lost City and Sundowns are staying at the Cabanas?

"How do you come up with that decision‚ you can do it but you are going to create problems. It’s not an easy one but it is possible.

Mosimane‚ who signed a new bumper four-year contract extension at Sundowns on Thursday‚ said Rustenburg may not have enough training grounds to accommodate all topflight and lower tier teams.

“There is a lack of training pitches in Rustenburg.

"When last did you see the Olympic Park Stadium used and how does the pitch look like now?

"Are we all going to play on one pitch at Royal Bafokeng Stadium.”

The outspoken coach insisted that he was not trying to make decisions on behalf of South African football.

“I have to be very careful of what I am saying because I must listen before I talk‚ and who I am to tell SA what to do. The government‚ PSL and Safa are there‚ I have to take the cue. For me Rustenburg has a problem of accommodation and big problems‚" he said.

"To be honest a month can conclude the season if we work well and do our things right in terms of precautions and adhering to health regulations. A round of eight games can be done in a month and we can complete but it is not for me to say how and when.

“It is not for me to say we can play behind closed doors. Let’s look at the way the rest of the world is doing‚ we can’t just bring everyone in.

"Germany has been successful for now‚ England have some rebounds now. I don’t know what is happening in China because I don’t have most of the information. Just follow and copy good things

"In Spain‚ which was heavily affected‚ Barca are training.

Sundowns were four points behind leaders Chiefs when the season was suspended in March.

Sports‚ arts and culture minister Nathi Mthethwa confirmed this week that the government is considering a plan for a phased-in return of professional sports.

He told a joint parliamentary portfolio committee of sports‚ arts and culture about the discussions on the plan. The phased-in approach will begin with non-contact sports.